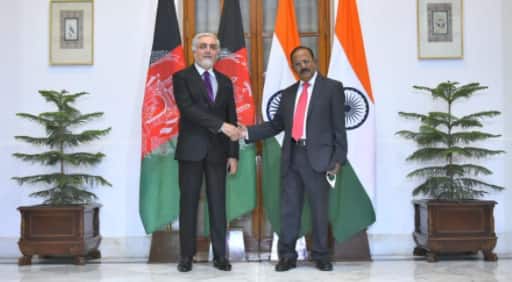 He said, “Discussed the Afghan peace process and talks in Doha. He assured India’s full support for peace efforts and any peace settlement acceptable to Afghans, will have India’s support.”

The Chairman, High Council for National Reconciliation, stated that his country is in favour of an independent, democratic, sovereign, and peaceful Afghanistan, where no terrorists can operate.

He also thanked India for the invitation, its continued support for Afghanistan, and its constructive role in peace efforts.

Abdullah is here to exchange views on the negotiations between the Afghanistan government and the Taliban at Doha, Qatar, and bilateral relations.”Arrived in New Delhi, India, to begin my official visit.

During my stay in New Delhi, I will meet the leadership of India, and exchange views on Afghan Peace Process, and bilateral relations,” Abdullah Abdullah wrote in a tweet.

Abdullah, accompanied by a high-level delegation, is here on an invitation by the Government of India to discuss the peace efforts and the need for regional consensus and support for the Afghan peace process.

Prior to his departure to India, Abdullah had said, “India is a strategic partner of AFG and has continuously supported the government and people of AFG. Our historical relations with India are very important to us, and the role of India in establishing lasting peace in AFG and the region is vital.”

“I am visiting India upon an official invitation by the Gov. of #India to discuss the peace efforts, and the need for regional consensus & support for the #AfghanPeaceProcess,” he added.

This is the first visit of Abdullah to India after the formation of a new government in Afghanistan.

Diwali to Diwali: These 5 ‘rocket’ shares expected to give you...

Russia likely to start COVID-19 vaccine distribution for public from this...