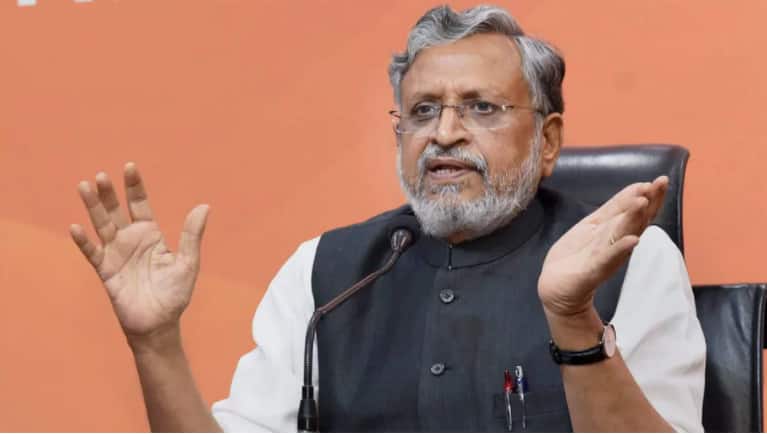 New Delhi: Confident about the ruling NDA returning to power in Bihar, Deputy Chief Minister Sushil Modi said on Tuesday that no political party is in a position to form a government alone in the state where ‘alliance politics’ has become a reality with the BJP, JDU, and RJD being three major triangular forces.

In an interview with PTI-Bhasha, the senior BJP leader claimed the opposition grand alliance, led by Rashtriya Janata Dal (RJD) and known as ‘Mahagathbandhan’, was nowhere in fight against the National Democratic Alliance (NDA) and also lacked credibility.

He said the NDA, under the state leadership of Chief Minister Nitish Kumar, would contest the elections unitedly and form the government again. “BJP (Bharatiya Janata Party), JDU (Janata Dal-United), and RJD are major triangular forces of Bihar politics and alliance is the state’s reality. There should not be any misconception about it. Today, no political party is in a situation to form a government of its own,” Modi said.

The term of the Bihar legislative assembly is scheduled to end on November 29 and the polls are likely to be held sometime in October-November.

Referring to the 2015 assembly polls that the BJP had contested alone and the 2014 Lok Sabha elections fought alone by JDU, Modi said, “The BJP has no misunderstanding about its strength. We are strong and we have an organisation, but we will succeed only when we fight together. The BJP’s central leadership is also not under any illusion about it.”

He said the alliance between the BJP and JDU has been a smooth affair since 1996 and it has provided good governance in the state with robust coordination among alliance partners. “We will contest the next assembly polls unitedly and succeed,” Modi said.

Asked about the alleged discontent among the NDA partners with the JDU and the LJP (Lok Janshakti Party) targeting each other over a host of issues including holding elections during the COVID-19 pandemic, Modi called it “momentary” and hoped the issue will be resolved soon.

“The leadership of all allies are very matured and strong-minded. Everything will be resolved. There will be no split in the BJP-JDU-LJP alliance. We will fight unitedly,” he said.

Modi, a long-term associate of Chief Minister Kumar, rejected the opposition parties’ charge that there was resentment among people over the state government’s handling of the COVID-19 pandemic and floods and also its alleged apathy towards migrant labourers.

“The state government turned every crisis into an opportunity. There is no resentment as is being claimed. Today, neither the migrant labourers nor floods are any issue,” he said.

Modi said there might have been some issues in the initial days as no one was fully aware of the then-emerging situation after imposition of lockdown in view of the coronavirus crisis, but the situation was under control after 10 days.

Asked whether the BJP would be in a position to lead the alliance in the state in the near future, the senior BJP leader did not give a direct reply. “The place that the BJP has attained in the politics of Bihar today is not below par,” he said.

Modi said the party has already decided on who will be the chief minister. “Nitish is already there and there are no ifs and buts about his role. We will contest the elections under his leadership. The BJP will ensure the victory of its candidates as well as of the allies,” he said.

He rejected any notion about the opposition grand alliance being able to put any major challenge against the NDA and said, “They have neither any leadership nor any credibility. There is no credibility of their leadership also. There is not even transparency.”

“Their entire leadership is immersed into corruption.” he alleged while asserting that the opposition alliance “stands nowhere against us”.

Modi said the NDA has contested five elections against the grand alliance and defeated them every time. “As far as the difference of vote share between the two alliances is concerned, it has been up to 13 percent (in state polls). The difference reached 23 percent in the last Lok Sabha polls. It’s a huge difference,” he said.

Before the 2014 parliamentary polls, the JDU had left the NDA and contested the 2015 Bihar assembly elections in alliance with RJD. The then the grand alliance of RJD, JDU, and Congress had formed the government in the state also, but the political scenario changed in 2017 with the JDU returning to the NDA.

Modi slammed opposition parties for “ruining” Bihar under their 55 years of rule and said he was challenging them to contest the next elections on issues of ‘bijli, sadak and pani’ (electricity, roads, and water).

“Had they performed on these basic issues, we would have taken the state to greater heights,” he said while claiming 80 percent of the promises made by the BJP during the 2015 assembly polls have been already fulfilled. “Be it electricity, roads or water or even agriculture, we have done unprecedented work,” he said.

Apple latest feature will unlock iPhone with your facemask on, here’s...

Careful! Bursting or selling of firecrackers may attract Rs 1 lakh...