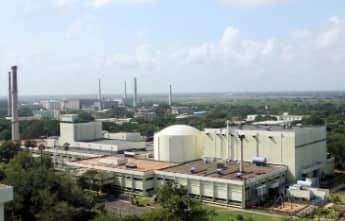 According to the IGCAR, their major offerings for which Intent of MOU will be exchanged include Thermal Imaging technology for early detection of breast cancer, Autonomous Gamma Dose Logger (to measure radiation), Portable Air volume sampler (for pollution analysis) and Application of Ionising Radiations in Agriculture and Related areas to improve the shelf life of vegetables and fruits. The organization has said that the Intent of MOU will be exchanged for these technologies/products developed at IGCAR.

The Centre’s Director said that these spin-off technologies that were developed over the last decade were ready to be transferred to start-ups and industries.

KN Vyas, Secretary, Department of Atomic Energy, on Friday inaugurated a technology Incubation Centre at IGCAR, via the virtual mode. The incubation center is meant to be catalytic in incubating technologies from IGCAR and also spin-off technologies from Bhabha Atomic Research Centre and other units of DAE in the Southern part of the country through appropriate handholding with entrepreneurs and MSMEs. 30th October 2020 also marks the 111th Birth Anniversary of Dr Homi Jehangir Bhabha, the Father of the Indian Atomic Energy program.

AK Bhaduri, Director, IGCAR, spoke of some of the products their facility had developed, such as an explosive detector, narcotics detector, access control systems used for securing vital installations, greenhouse gas sensors, and wastewater management solutions among others. He emphasized that some of their offerings cost just 25% that of the imported ones.

The IGCAR signs up non-exclusive MoUs with interested parties, with a one-time technology transfer fee of Rs 5 lakh and there is also a provision of some share in the profits earned by the company.

When asked about the thermal imaging for the detection of breast cancer, IGCAR officials told Zee Media that they have developed a grading scale for a standard imaging device and that it was a portable system. “By integrating three approaches, we have enhanced specificity and sensitivity. We have validated this product’s results with ultrasound and mammography in over 700 cases and it has 90% sensitivity. It is non-contact, non-harmful and not painful and can be used for detection in women below the age of 40(which is the usual age)” the officials said.

The Autonomous Gamma Dose Logger is a radiation monitor to measure environmental radiation in nuclear installations and other places, and it transmits data wirelessly. ICGAR says it is possible to have large deployments of these units including across rough terrains and it can be installed across borders to monitor the movement of radioactive materials.

A portable air volume sampler is a lightweight device made of fibre reinforced plastic, which is employed to collect airborne particulates in a filter paper. It can be used by pollution control boards for collecting suspended particulate matter in monitoring environmental pollution and in industries discharging particulate effluents.

How Russia, India worked together for world’s ‘loneliest’ elephant Kaavan to...