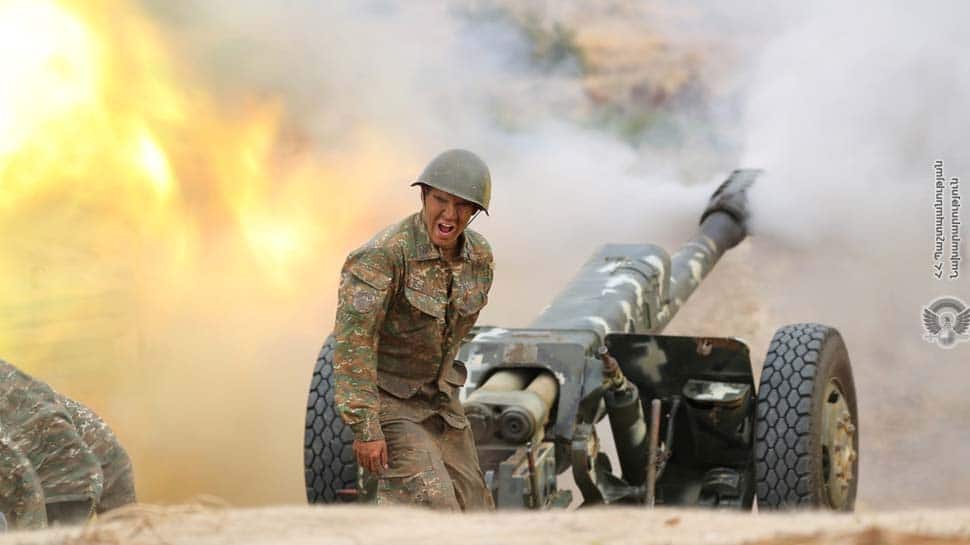 The deadliest war between Azerbaijan and Armenia continued to rage on Thursday, for more than a week with artillery and heavy guns. The United States, France and Russia stepped up efforts to secure a ceasefire and avert a wider war in the South Caucasus.

Azerbaijan said the city of Ganja had come under fire, deep inside its territory. Ethnic Armenians who control the mountain enclave of Nagorno-Karabakh inside Azerbaijan said Stepanakert, its main city, had been shelled by Azeri forces. In a sign of growing alarm in the region, the head of a six-country military alliance that is led by Russia and includes Armenia warned that the group could intervene if Armenian sovereignty were threatened.

CURRENT SITUATION: The continued fighting and rising tension underlined the difficulties facing U.S., Russian and French officials meeting in Geneva to try to halt fighting in which at least 400 people have been killed since it broke out on Sept. 27. Azeri Foreign Minister Jeyhun Bayramov was due to attend Thursday`s talks, but no direct meetings have been scheduled between Armenia and Azerbaijan.

Armenian Foreign Minister Zohrab Mnatsakanyan is expected to hold separate talks with U.S., French and Russian officials in Moscow on Monday. Washington, Paris and Moscow are co-chairs of the Organization for Security and Co-operation in Europe`s Minsk Group that has led mediation over Nagorno-Karabakh since 1992.

“The position of the United States has been clear and has not changed: both sides must cease hostilities immediately and work with the Minsk Group Co-Chairs to return to substantive negotiations as soon as possible,” a U.S. spokesman said.

No news conference was planned in Geneva and the sides did not say where in the Swiss city they were meeting, hoping to keep details secret and boost hopes of a breakthrough. Nagorno-Karabakh`s defence ministry denied a ceasefire had been agreed to go into force on Thursday.

INTERNATIONAL CONCERN: Under international law, Nagorno-Karabakh belongs to Azerbaijan, but it is populated and governed by ethnic Armenians and broke away in a 1991-94 war that killed about 30,000. The renewed fighting has increased concern that Turkey, a close ally of Azerbaijan, and Russia, which has a defence pact with Armenia, could be sucked into the conflict.

The clashes have also increased worries about the security of pipelines in Azerbaijan that carry natural gas and oil to Europe, and Moscow fears Islamist militants will enter Nagorno-Karabakh and use it as a base for which to enter Russia. Stanislav Zas, who heads the Collective Security Treaty Organisation (CSTO) that groups Russia and five other former Soviet republics, gave no details when he said it could intervene if Armenia`s sovereignty were threatened. But he said the group did not welcome any actions by Turkey and other countries that were aimed at fostering peace.

DEATHS: Azerbaijan says 31 Azeri civilians have been killed and 154 wounded since Sept. 27 but have not disclosed information about military casualties. Nagorno-Karabakh said 350 of its military personnel and 19 civilians have been killed. Azeri President Ilham Aliyev`s main demand for a ceasefire is for Armenia to set a timetable for withdrawal from Nagorno-Karabakh and surrounding Azeri territories.

STANCE: Armenia has ruled out a withdrawal from territory it considers its historic homelands. It has also accused Turkey of military involvement in the conflict and sending in mercenaries, allegations denied by Ankara. In other fallout from the conflict, Armenia fired its National Security Service chief without giving a reason, and Azerbaijan recalled its ambassador to Greece for consultations – a tit-for-tat move after Athens withdrew its own envoy, saying Azerbaijan had accused it of tolerating militants on its soil.

(with inputs from Reuters)

‘Patient activation’ may improve quality of life in individuals with kidney...

Despite Lebanon’s woes, Armenians spring to action for Nagorno-Karabakh | World...

Kerala imposes Section 144 for a month as COVID-19 tally crosses...