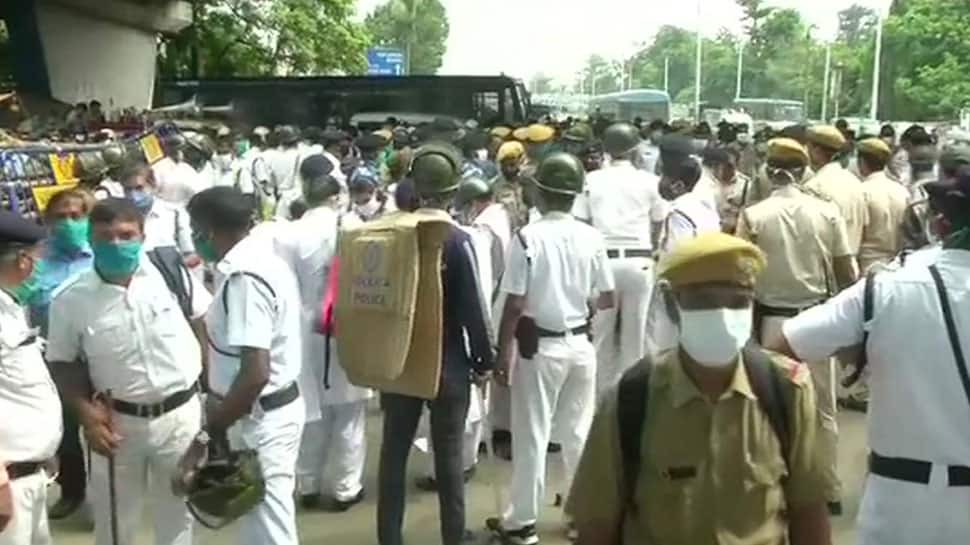 The clashes erupted soon after the BJP workers gathered outside the party’s state headquarter in Kolkata to participate in the ‘Nabanna Chalo’ agitation, raising anti-government slogans. West Bengal Police had to use tear gas, water cannon to disperse the BJP workers at Howrah’s Santragachi during the saffron party’s ‘March to Nabanna’.

The BJP leadership in the state had earlier claimed that the march would comprise over a few lakhs of saffron supporters. BJP supporters have arrived from various districts and assembled at the four starting points.

The “Nabanna Abhiyan” has been called by the BJP Yuva Morcha, the youth arm of the party.

The protest march is part of the BJP`s strategy and final push against the ruling Trinamool Congress government in West Bengal, as the state assembly election is due in April-May next year.

The Mamata Banerjee-led state government on Wednesday though announced that the building will remain shut for two days, on October 8 and 9, “for Covid-19 sanitization drive.”

A huge contingent of police and rapid action force (RAF) had been deployed in and around the Nabanno area to control any untoward incident during the protest march. The police officials have been seen carrying out aerial surveillance using drone devices in various entry points. According to sources, about 2,000 police personnel have been deployed only in Kolkata.

An adequate number of water cannons and iron barricades are kept on stand-by near the state secretariat building and a steel wall has also been erected to stop irate protesters from breaching the security cover, police said. The entire area has been cordoned off by the bamboo barricades.

The state BJP leadership also termed the decision of closing down Nabanno as a reflection of the Trinamool Congress` fear.

Natural enemy of Asian fruit fly – previously thought to be...

AAP workers to observe fast on Dec 14 in support of...

Delhi man, out on bail in criminal cases, shot dead by...