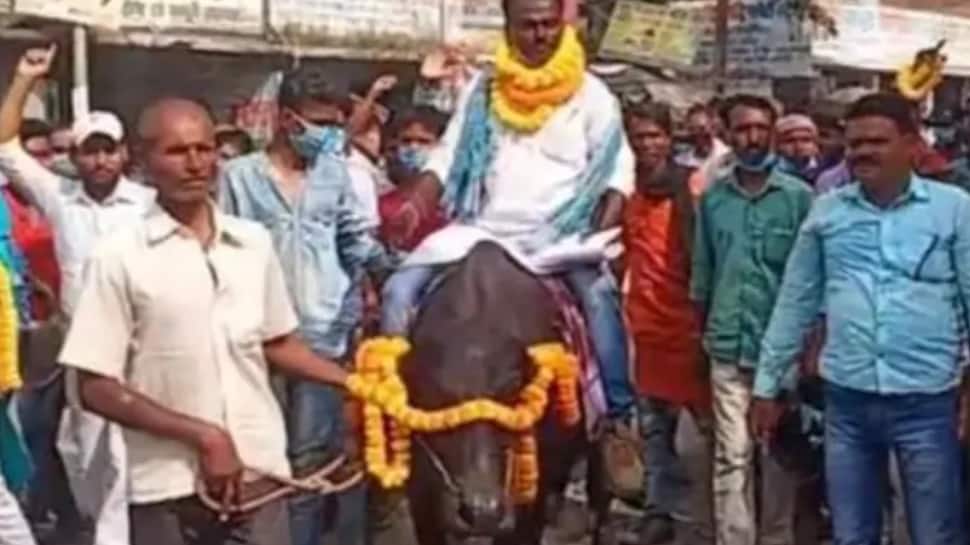 In a bizarre development, an independent candidate from Bahadurpur assembly constituency in Bihar’s Darbhanga went to file his nomination riding a buffalo. The candidate identified as Nachari Mandal was also followed by his supporters.

Explaining the reason behind his decision to ride a buffalo, Mandal said he does not have a four-wheeler and that’s why he used the buffalo to reach Darbhanga to file his nomination to contest upcoming Assembly election in Bihar.

“I come from a poor and weaker section. I am the son of a farm labourer and since I don’t have a four-wheeler, I decided to come on a buffalo,” Nachari Mandal said told ANI.

Talking to ANI, Mandal said if he manages to win the Assembly election, he will work for the upliftment of the farmers and help the poor by providing government benefits to them.

“Due to the lack of development done by previous legislators, there is anger among the public,” Nachari Mandal was quoted as saying by ANI.

#WATCH | Bihar: Nachari Mandal, an independent candidate from Bahadurpur constituency in Darbhanga, arrives to file his nomination on a buffalo. pic.twitter.com/9e7lygTqPr

In a similar incident, a candidate for Gaya assembly seat was booked on Monday under the Prevention of Cruelty to Animals Act after he rode on a buffalo to file his nomination.

Age not just a number: Causes of joint stiffness differ between...

COVID-19: Know the top five worst-hit state due to coronavirus in...