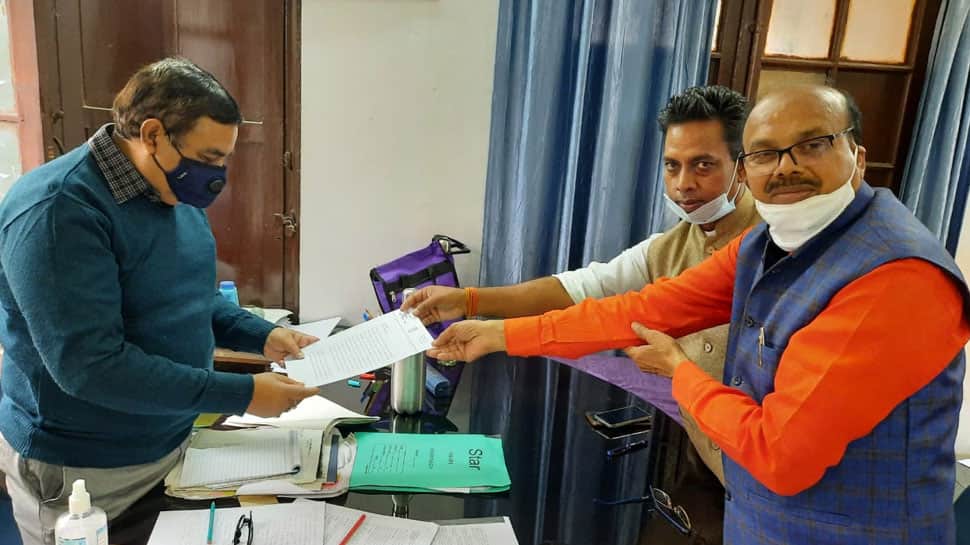 Ranchi: Bihar BJP MLA Lalan Paswan on Thursday (November 26, 2020) filed an FIR against jailed RJD supremo Lalu Prasad Yadav, who had allegedly contacted him over the telephone and told him to abstain from voting during the election to Speaker of the State Assembly.

The matter came to light after an audio clip in which Lalu Yadav could be heard offering a ministerial berth to Paswan in exchange for helping the Opposition in defeating the NDA candidate for Assembly Speaker’s post went viral, triggering a  big political controversy.

The Bihar BJP legislator from Pirpainti filed the FIR against the RJD chief at the vigilance police station under the Prevention of Corruption Act and relevant sections of the Indian Penal Code.

In his FIR, Paswan described RJD supremo Lalu Prasad Yadav’s attempt to lure him as an “insult of people’s mandate”. Paswan, in his police complaint, alleged that Lalu Yadav deliberately made a call from inside the jail to buy the vote of the MLA, who is a public servant, and topple the National Democratic Party government. He alleged that Lalu Yadav offered him a ministerial berth in lieu of his support.

Lalu Yadav is currently lodged in a Ranchi Jail, serving sentences in a number of fodder scam cases. The purported call was made by him on Tuesday. The audio clip, which was shared by former Bihar Deputy CM Sushil Modi on his Twitter handle showed Lalu asking Paswan to “be absent, saying that you have got afflicted with corona”.

The RJD chief contacted me on my mobile phone and tried to buy my vote in favor of the grand alliance and his party, the BJP MLA alleged.

Meanwhile, the Jharkhand government has tightened the security of the RJD president after an audio clip of his alleged conversation with BJP MLA Paswan in Bihar went viral. According to reports, Lalu has been shifted to RIMS Paying Ward from RIMS Director’s residence. He has been kept under the strict supervision of Ranchi Jail Superintendent

The security in and around the Paying Ward of RIMS, where Lalu has been shifted, has been tightened. The Jharkhand government has also ordered a probe into the audio clip controversy in which Lalu Yadav can be heard enticing the NDA legislator.

Inspector General, Prisons, Virendra Bhusan told PTI- Bhasha that he has asked Ranchi Deputy Commissioner, Superintendent of Police and Superintendent of Birsa Munda jail to inquire into the matter and if the allegations are found true initiate lawful action.

The jail IG said he ordered an inquiry after himself hearing the purported audio clip of the conversation between Prasad and the legislator. Bhusan said the jail manuals do not allow the use of phone or mobile during judicial custody and if the allegations were found correct it would be enquired as from where the mobile phone came to Prasad and who is responsible for it.

He also said any political talks are prohibited when a person is in judicial custody. The jail IG said Prasad, who is in RIM’s Director’s bungalow with the permission of the district administration, will be shifted.

A PIL has already been filed in the Jharkhand High Court seeking a proper examination of Prasad’s ailment and sending him back to jail.

Former Bihar deputy chief minister Sushil Kumar Modi, who had made a sensational claim earlier that Prasad was having access to a mobile phone through which he was calling up NDA legislators, followed it up with an audio clip of a purported conversation between the RJD supremo and the saffron party MLA.

Sushil Modi shared the one-and-a-half-minute long clip on his official Twitter handle wherein Prasad can be heard speaking, in his unique voice and distinct accent, to the Pirpainti MLA Lalan Paswan.

The BJP MLA later confirmed the veracity of the audio clip and said the conversation took place in the very presence of Sushil Modi, apparently not in knowledge of the wily RJD supremo. The RJD supremo is in jail in Ranchi since December 2017 after conviction in cases of multi-crore rupees fodder scam.

On health ground, he was admitted to Rajendra Prasad Institute of Medical Sciences (RIMS). Recently, he was shifted to RIMS Director’s bungalow after his aides were found infected with the coronavirus.

Unlock 5.0 guidelines likely today: Here’s all you need to know...

Pakistan to merge Gilgit-Baltistan with the mainland under China’s pressure for...

Ford EcoSport SE launched in India, SUV to come without a...