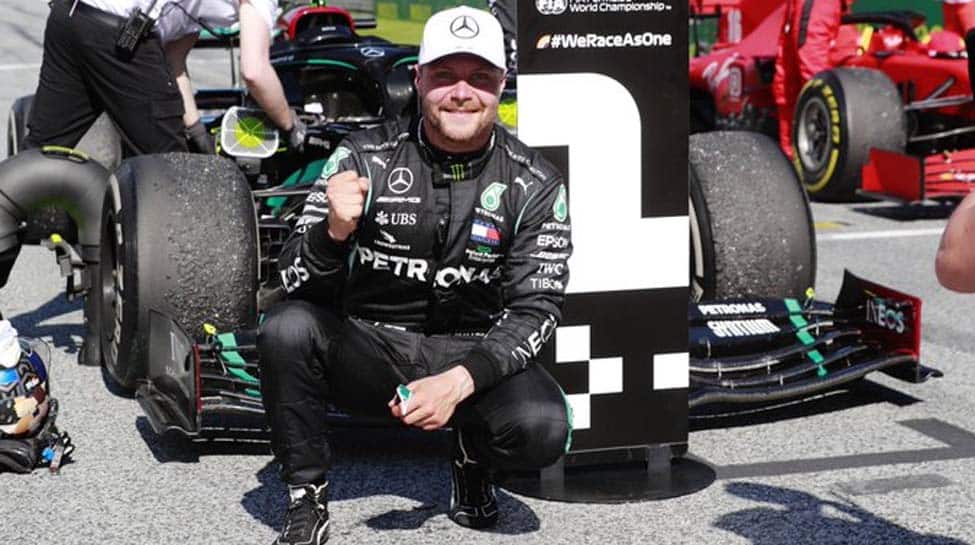 The Finn, who turned 31 on Friday, lapped the seven km Spa-Francorchamps track in one minute 44.493 seconds, beating Hamilton by just 0.069 seconds on a cool and cloudy morning.

Max Verstappen was best of the rest again in third for Red Bull.

The Dutchman, who has a Belgian mother and is missing the support of his army of orange-clad supporters who usually throng the grandstands at Spa, was hot on the Mercedes pair`s heels, ending the session just 0.081 seconds off the pace.

Hamilton, winner of four of this season`s six races and currently in the form of his life, leads the overall standings by 37 points from Verstappen.

Bottas, who won the season-opening Austrian Grand Prix in July, is third 43 points behind his team mate.

With 11 of this season`s 17 races still to run, he needs to start turning the tide if he is to have any hope of denying Hamilton a record-equalling seventh title at the end of the year.

Sergio Perez was fourth in his Mercedes-inspired Racing Point ahead of Canadian team mate Lance Stroll.

Esteban Ocon, who made his Formula One debut in Belgium in 2016, was seventh for Renault ahead of McLaren`s Carlos Sainz.

Daniel Ricciardo was ninth in the other Renault with Briton Lando Norris rounding out the top-10 for McLaren.

Ferrari, winners for the last two years in Belgium, continued to struggle.

Charles Leclerc, who took his maiden Formula One win at the Spa circuit last year, was only 14th ahead of departing four-time champion Sebastian Vettel in 15th.

The session was largely uneventful.

All cars carried special stickers in memory of Frenchman Anthoine Hubert, who suffered fatal injuries in a Formula Two race on the Saturday of the Belgian Grand Prix weekend last year.

Bottas suffered a late-session puncture but returned to the pits without incident.

When informed about it on the radio he quipped: “I`m getting used to these punctures, I had a puncture last weekend in my road car.”

Abu Dhabi T10 League live streaming: When and where to watch...

Major depressive disorder may be defined by a distinct gut microbiome

New population of immune cells could play a role in multiple...