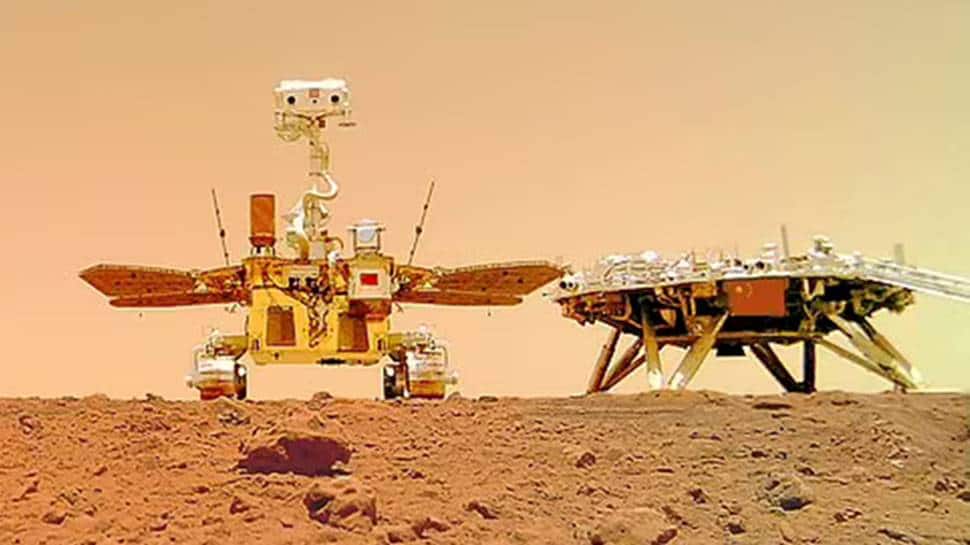 New Delhi: China’s first-ever rover to land on another planet, the Zhurong rover is celebrating its first month on Mars and China National Space Administration (CNSA) released a selfie.

In the image shared by Chinese spact agency, Zhurong can be seen with its landing platform in the background sproting the Chinese flag, from which the rover rolled off at the end of May to begin its exploration.

The China National Space Administration (CNSA) said, Zhurong successfully touched down on Utopia Planitia, a vast northern lava plain on the Red Planet, on May 15, after it spent about three months orbiting the planet.

The Chinese rover is surveying Utopia Planitia for signs of water or ice that could lend clues as to whether Mars ever sustained life. It is the second rover to land and operate a spacecraft on Mars, after the US Perseverance rover.

Zhurong blasted off from Earth in July 2020, tucked in the belly of China’s Tianwen-1 spacecraft, which entered Martian orbit in February.

Meanwhile, the US spcae agency NASA expects its rover to collect its first rock samples in July for return to Earth as early as 2031, as part of an ambitious, multi-stage mission.

Notably, China has now sent astronauts into space, powered probes to the Moon and returned the first moon samples to Earth in more than 45 years.

Have you read the ‘mail from Mars’ yet? If not, we have got you covered | Science & Environment News

Dominic Thiem confident of turning things around for US Open |...

Microbes in the gut could be protective against hazardous radiation exposure

Woodpeckers’ drumming: Conserved meaning despite different structure over the years