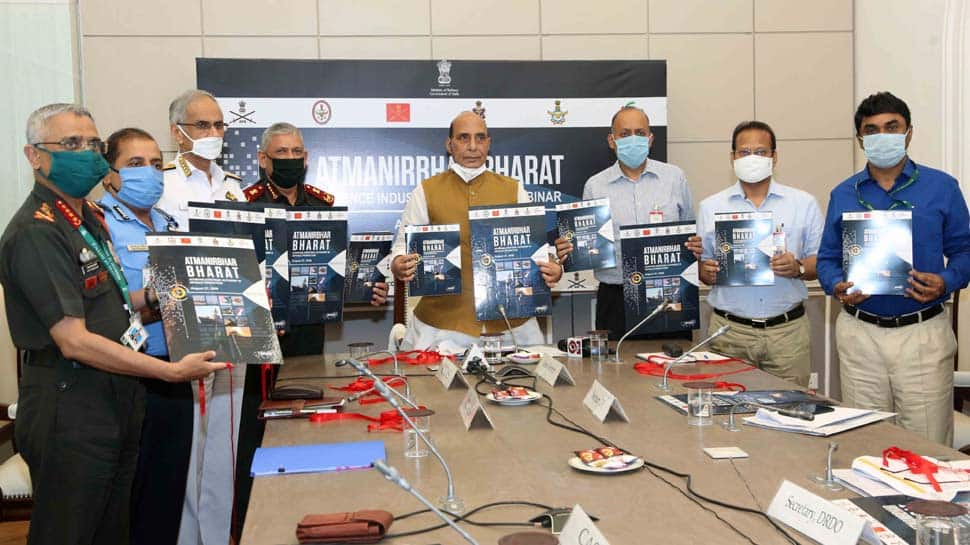 Union Defence Rajnath Singh on Thursday asserted that in the coming time, defence equipment worth Rs 1.40 lakh crore will be purchased domestically. Speaking at the Defence Industry Outreach Webinar, Singh said that the government has made several bold policy reforms to promote self-reliance in the defence sector.

On the Defence Ministry issuing a negative list of 101 defence items on the valuable suggestion of Prime Minister Narendra Modi, Singh said, “After a certain period of time these items will not be procured from outside. This list is the beginning of a process that has the potential to transform the defence industry. This list of 101 items includes not only minor parts but also warfare systems, integrated platforms, combat vehicles. This list is just a beginning so that in the coming time, defence equipment worth Rs 1.40 lakh crore will be purchased domestically.”

He said that the bold policy reforms in the defence sector include increasing the limit to 74 per cent for Foreign Direct Investment through automatic route in the defence sector and setting up of defence corridors in UP and Tamil Nadu in addition to Strategic Partnership (SP) Model to promote investments, liberalisation of Industrial License regime, and ‘Defence Investor Cell’ to address the problems of investors.

Singh said, “Self-reliance is actually another form of our confidence and strength. According to the formula presented by our Prime Minister five ‘I’, i.e., Intent, Inclusion, Investment, Infrastructure and Innovation, we have taken steps towards increasing our own strength. Its results have also started coming in front of us.”

Speaking about the urge of nations to become self-reliant, the Defence Minister said, “The spirit of ‘self-reliance’ has always been present in our society, our education and values. It has existed as part of us, from our tradition to modern times. It has existed from ‘the Vedas’ to ‘Vivekananda Ji’, from ‘the Geeta’ to ‘Gandhi Ji’, and from ‘Upanishads’ to ‘Upadhyay’ (Deendayal) ji. Everyone, whether they have been our great men or our governments, in their own way accepted the importance of self-reliance. But in the recent past, the emphasis placed on the call of our Prime Minister Narendra Modi on Aatmanirbharta is unprecedented.”

While answering questions from the participants, Singh said that corporatisation of Ordnance Factory Board (OFB) would be completed within a year. In response to another question, he replied that the two Defence Industrial Corridors in Uttar Pradesh and Tamil Nadu were targeted to attract thousands of crores of investments in the next five years. Industry representatives also sought clarifications on various reforms introduced in defence acquisition procedure including offset provisions, reservation of items for procurement from MSMEs, the definition of Indian vendor etc.

It may be recalled that PM Modi had highlighted the need for achieving self-sufficiency in defence production in his clarion call on ‘Atmanirbhar Bharat Abhiyan’ during his announcement of COVID-19 related economic package of Rs 20 lakh crore on May 12, 2020. He further outlined his vision for the same on June 02, 2020; wherein five pillars of Atmanirbhar Bharat were identified as economy, infrastructure, systems, vibrant demography and demand.

The defence sector has already been identified as one of the core areas to boost ‘Make in India’ where immediate transformation is required. The PM also spelt out his vision of achieving five billion USD (Rs 35,000 crore) defence-related exports target to become a net exporter of defence equipment in the next five years.

To promote Atmanirbhar Bharat in the defence manufacturing, a separate budget of Rs 52,000 crore has been set aside for procurement from domestic vendors.

Towards this end, a draft Production and Export Promotion policy has been formulated and it was placed in the public domain seeking suggestions from various stakeholders.

The draft of Production and Export Promotion policy aims at providing greater visibility of Armed Forces requirements to the defence manufacturing industry. The policy proposes the establishment of an aero-engines complex with a focus on Maintenance Repair Overhaul (MRO) as well as critical technologies. Under this policy export target has been set as 25 per cent of the revenue. By 2025, this policy aims at achieving Rs 1.75 lakh crore in annual turnover.

US State Dept says LAC situation will be discussed at 2+2...

How is CBD oil freely available online if it is illegal,...

Flights, trains to Mumbai may be suspended as COVID-19 cases spike...