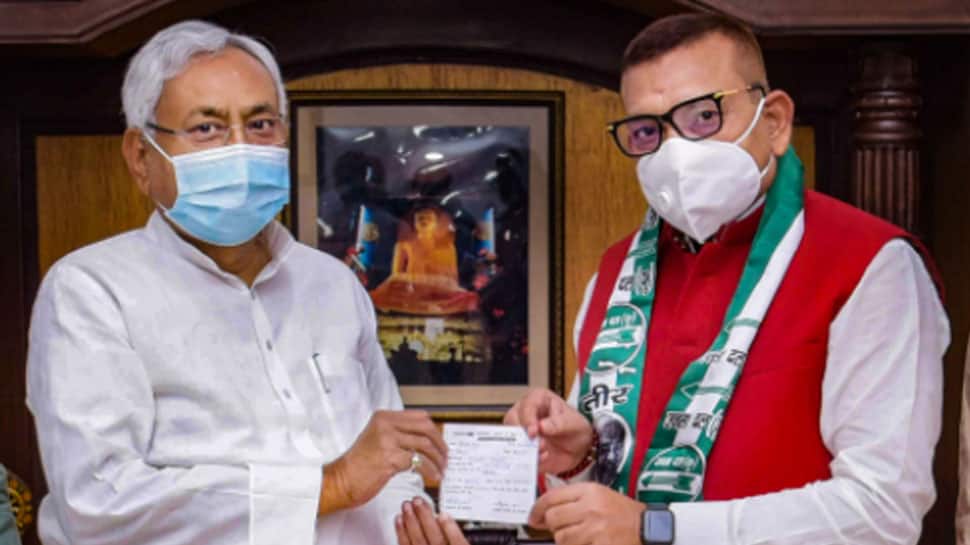 Ahead of Bihar Assembly election 2020, former Director-General of Police (DGP) Gupteshwar Pandey on Wednesday made a major announcement, explaining his role in the upcoming polls. The former IPS officer, who had served as an outspoken DGP of Bihar until taking voluntary retirement, followed it up with a formal induction into the JD(U).

Pandey has been denied assembly ticket and following this, he took to a social media platform and posted about his major decision. In a Hindi post, he said, “I am upset with the phone of many of my well-wishers. I also understand their concern and problems. After my retirement, everyone expected that I would contest the election but this time I am not contesting the assembly elections.”

He added, “There is nothing to be disappointed Be patient. My life has been spent in struggle. I will be in service of the public all my life. Please be patient and do not call me. My life is dedicated to the people of Bihar. I salute all the big brothers and sisters, mothers and youth of my native land Buxar, and all the elders and siblings of this place of religion. Keep your love and blessings!”

The BJP on Wednesday cleared names of two more candidates, including for the Buxar seat where speculations were rife that former DGP Gupteshwar Pandey may contest the state elections. The party gave a ticket to Parshuram Chaturvedi from Buxar constituency and Deepak Sharma from Arwal seat, a BJP statement said.

The saffron party had issued a list of 27 candidates for the first phase on Tuesday.

Declaration of name from the Buxar seat ends all speculations of the former state police chief being fielded in the October-November polls. Media reports suggested that Pandey, who took VRS in September and later joined the JD(U), could enter the poll fray from his native Buxar seat or Shahpur in the same district.

Both the seats went to the saffron party under the seat-sharing formula in the NDA. The BJP has already named Munni Devi from Shahpur assembly seat. Bihar BJP media department member Ashok Bhat said that Chaturvedi is presently a member of the state executive committee and has been a committed party member.

Both Buxar and Arwal seats will witness voting in the first phase on October 28 along with 69 other constituencies.

The Buxar seat was won by Sanjay Kumar Tiwari of the Congress in 2015 state elections while in Shahpur RJD’S Rahul Tiwari had defeated BJP’s Visheshwar Ojha then.

Pandey, who made headlines for his ‘aukaat’ remark on actor Rhea Chakraborty, joined the Nitish Kumar-led JD(U) on September 27. The former top cop came into limelight for his role in Bihar Police’s investigation in the death case of Sushant Singh Rajput.

Pandey joined the party in the presence of Chief Minister Nitish Kumar, who is also the JD(U) president, less than a week after taking voluntary retirement from service. Pandey’s application for VRS was accepted by Governor Fagu Chauhan on September 21, five months before the 1987 batch IPS officer was to superannuate, and in a rare gesture, a three-month cooling-off period applicable to bureaucrats was waived in his case.

His much-anticipated induction took place a day after he met Kumar and insisted there was nothing political in their conversation. The 1987 batch IPS officer had strongly defended Kumar on the issue of institution of a CBI probe into the mysterious death of Sushant Singh Rajput, the Patna-born talented filmstar.

The voluble officer had reminded actor Rhea Chakraborty, Rajput’s girlfriend and the main accused in the abetment to suicide case being probed by the CBI, of her ‘aukaat’ (status) to question Nitish Kumar, when she suggested that there was politics behind the Bihar government’s decision to push for a CBI probe.

“I have a long, loving association with Nitish Kumar. He personally called me and offered party membership. I have a public profile and connect with people…People love me. But I don’t know anything about politics. I will do what I am asked to do,” he added.

When asked about his possibility of contesting the upcoming assembly polls, Pandey had replied, “This is not a decision I have to take. I shall work as a disciplined soldier of the party. Whatever role the party leadership deems fit for me, I will be happy to play. When reporters persisted with the query, Nitish Kumars close aide Rajiv Ranjan Singh alias Lalan Singh interjected, remarking in jocular vein “he has not yet submitted his biodata. Let him evince interest (in contesting the polls). Due consideration will be given”.

Known for speaking his mind notwithstanding the constraints that came with the rules governing civil servants, Pandey was in the headlines while the governments of Maharashtra and Bihar were engaged in a tug of war over the investigation in Rajput’s death case.

The Bihar DGP had publicly denounced the Mumbai municipal authorities for quarantining IPS officer Vinay Tiwari, who had landed in the western metropolis for heading the investigation after an FIR was lodged by Rajput’s father, accusing Rhea Chakraborty and some others of abetting the actor’s suicide.

The Shiv Sena, which heads the ruling coalition in Maharashtra, had accused Pandey of acting as a political pawn of the ruling dispensation in Bihar ahead of the assembly elections. Shiv Sena spokesman Sanjay Raut on the former DGP’s VRS said, he was running a political agenda with his statements on the Mumbai case and now he is going to receive his award.

Maharashtra Home minister and NCP leader Anil Deshmukh had said that Pandey’s quitting the job confirmed his doubts that in Rajput’s death case he was making comments not as a DGP but as a BJP leader. Pandey has earlier brushed aside criticism from the Shiv Sena, saying “they keep saying many things, I don’t give much credence to it.”

Meanwhile, Pandey, who had famously resigned in 2009 to contest the Lok Sabha polls but returned to his job after his resignation was not accepted by the state government, got a thumbs up from the BJP. Union minister Giriraj Singh told reporters in his Lok Sabha constituency Begusarai that Pandey has always been hugely popular with the masses.

“If he contests an election, he will win hands down, no matter whether he fights from Begusarai or anywhere else in Bihar, he said. Pandey has spent a significant part of his career in districts like Begusarai and Muzaffarpur.

Sensex tanks over 500 points in early trade; Nifty slips below...