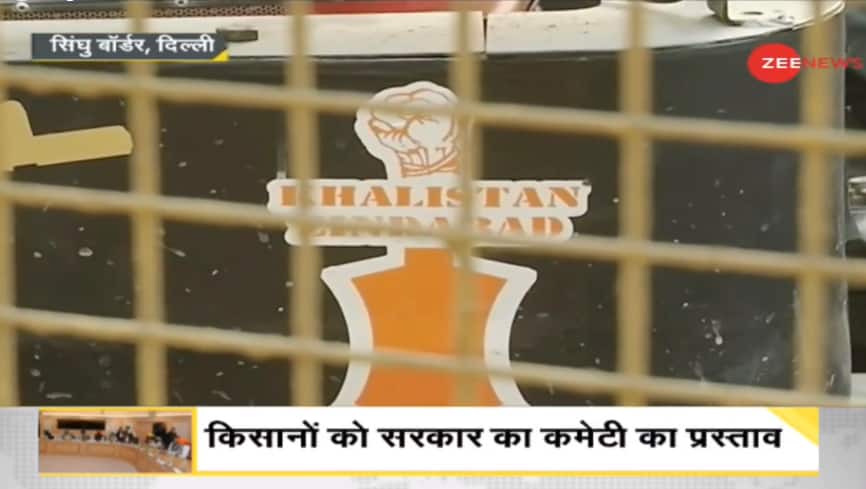 New Delhi: The deadlock over new farm laws still continues as the talks between the Centre and agitating farmer unions on Tuesday (December 1) failed. The farmers rejected the government’s offer to set up a committee to look into issues raised by them and vowed to intensify their stir until their demands are met.

Amid the ongoing protest of farmers, Zee News has repeatedly cited evidence of the entry of Khalistan, political parties, and anti-India forces that are trying to hijack this movement. This was further proved today when Canadian Prime Minister Justin Trudeau made a statement expressing his concern about the agitating farmers in India.

The Canadian PM said, “the news coming out of India, about the protest by farmers, the situation is concerning. We are all worried about families and friends” while addressing the Indian community in Canada during an online event on Monday to mark the 551st birth anniversary of Guru Nanak Dev.

“Let me remind you, Canada will always be there to defend the right of peaceful protests, we believe in the importance of dialogue, that is why we have reached out through multiple means, directly to Indian authorities, to highlight concerns,” Justin Trudeau added.

India has strongly reacted to PM Trudeau’s remarks on ongoing farmer protests, calling it “ill-informed”. Ministry of External Affairs (MEA) spokesperson Anurag Srivastava on Tuesday said, “We have seen some ill-informed comments by Canadian leaders relating to farmers in India. Such comments are unwarranted, especially when pertaining to the internal affairs of a democratic country.” “It is also best that diplomatic conversations are not misrepresented for political purposes,” he added.

Notably, Zee News has always reported such issues, thereby, hurting sympathisers of anti-India forces. In the ongoing farmers’ protest when it highlighted the entry of Khalistan supporters, it had to face protest and the entry of Zee News reporter was banned. This was first happened in JNU, then in Shaheen Bagh, and now at the farmers’ movement.

Interestingly, all those faces that were active in the Shaheen Bagh or at the JNU are now being seen among the agitating farmers. On Monday, pictures of a tractor standing on the Singhu border of Delhi were shown imprinted with an AK-47 rifle. When the Zee News team reached the place again and questioned about the tractor, slogans were raised against us and the team was forced to leave.

Earlier in the evening, the meeting between the agitating farmers and the Central government lasted for about 4 hours at Vigyan Bhavan, where the 35 farmer leaders met with the ministerial delegation that included Agriculture Minister Narendra Singh Tomar, Commerce Minister Piyush Goyal, and Minister of State for Commerce Som Parkash.

The government has proposed to the farmers to suggest the names of a maximum of 5 members who will be part of an expert committee that will also include ministers from the government and some agriculture experts. The farmers also said that they have no objection to the formation of the committee, but they will continue their agitation till the panel finds a solution to their demands.

In the meeting, the government also explained to the farmers through a presentation that the concerns of the farmers regarding MSP and APMC are unfounded and the government will take full care of the interests of the farmers. The farmer leaders remained adamant and sought the withdrawal of all three agricultural laws along with a written guarantee of Minimum Support Price (MSP).

About the Vigyan Bhawan meeting with 35 farmer unions, Agriculture Minister Narendra Singh Tomar said, “We had a good discussion. We told Kisan unions that it would be better to have a small group to discuss the laws clause by clause. But they wanted a discussion with all.”

He further said, “The government has no problem with that. We were ready for discussion earlier, we are ready now and we will be ready in the future too. So on December 3, we will have the fourth round of talks.” Tomar, however, emphasised that the government is fully committed to the welfare of farmers and agriculture development is always on the top priority.

The All India Kisan Sangharsh Coordination Committee (AIKSCC), an umbrella outfit of the farmer unions, which are pressing for the repeal of the laws, said the talks remained inconclusive, and added that they rejected the government proposal to form a five-member committee to look into the objections and study the concerns.

Maruti Suzuki launches 5th round of ‘MAIL’ initiative for start-ups |...

We recognise Arunachal Pradesh as Indian territory and oppose any claims...

Unlock 5.0 guidelines likely today: Here’s all you need to know...