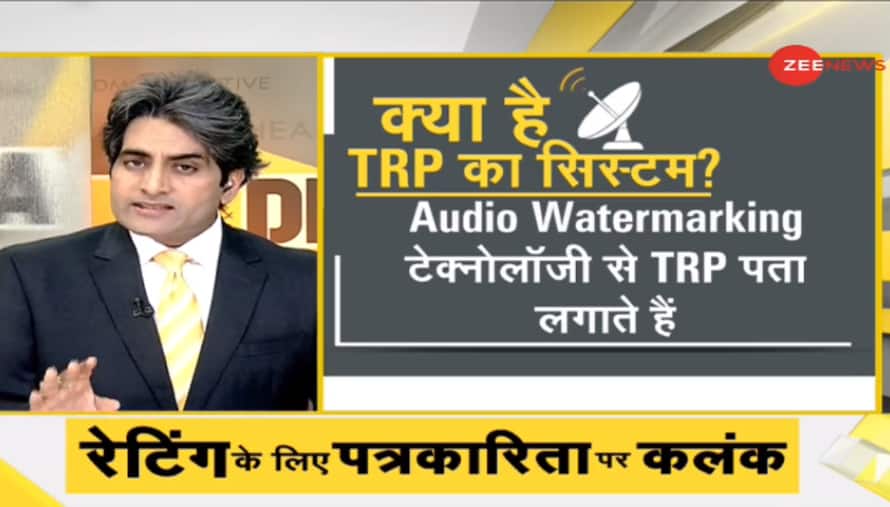 New Delhi: The 8th of October became the cruelest day for news TV channels. The Mumbai police on Thursday claimed to have busted a Television Rating Points (TRP) manipulation racket. The TRP is a tool to judge which TV programmes are viewed the most as it also indicates viewers’ choice to show the popularity of a particular channel.

Mumbai Police Commissioner Param Bir Singh shocked the country when he claimed that the Mumbai Police has started an investigation against three TV channels on charges of tampering with TRP. The Mumbai police crime branch, which unearthed the TRP racket, also arrested two persons, owners of two Marathi channels, for manipulating the viewership ratings.

Param Bir Singh said that the Republic TV channel is also involved in the TRP racket and those responsible will be arrested, be it a director, promoter, or any other employee of the channel. Of late, the Republic TV has become the number one channel in the country, and this happened because of its highest TRP among the news channels.

The Mumbai Police revealed that this TRP was fake and was purchased, adding that many families in Mumbai were paid Rs 500 every month to open only one channel on their TV. This revelation has come on the day when the weekly TRP of TV channels are announced. Notably, the Mumbai police action was launched on a complaint from Hansa, the firm contracted by BARC, to place audience measurement meters to trace television channels that are being watched by households.

According to Param Bir Singh, about 30,000 such meters had been installed across India, of which 2,000 were in Mumbai. Singh further said owners of two local channels had been arrested along with an ex-employee of Hansa, who is suspected of leaking the communication about the meters placed in the households.

The Mumbai Police Commissioner told reporters that the Republic TV channel, facing flak over its attack on the city police and Maharashtra government in the Sushant Singh Rajput death case, was also involved in the “false TRP” racket.

In a statement, Republic TV, however, rubbished Singh’s claims. Arnab Goswami, editor-in-chief of the channel, said the Mumbai Police chief made false claims against Republic TV as the channel had questioned him in the Sushant Singh Rajput case investigation. Goswami said the channel will file a criminal defamation case against the Mumbai police commissioner.

Mumbai Police Commissioner Param Bir Singh spoke to Zee News and revealed how this false racket of TRP was being run. He also informed us about the action being taken against people involved in this scam.

The Broadcast Audience Research Council (BARC) welcomed the Mumbai Police investigation on fake TRP and said that it is committed to reporting a true picture of television viewership.

A BARC India spokesperson said, “As in all our previous cases of suspected panel homes intrusions, BARC India continues to follow its established vigilance and disciplinary guidelines… BARC India appreciates the efforts of the Mumbai Police and will provide the support asked of it.” It further said that it remains “steadfastly true” to its purpose to accurately and faithfully report “what India watches”.

About 200 million families in India watch the news on TV channels while 100 crore people in our country keep them update through their smartphones. But the expose of the TRP racket has, no doubt, shaken the faith of crore of people. This racket is similar to gaining fake followers and fake likes on social media.

You might have noticed that the news anchor of almost every news channel describes them as number one. The TRP is an intrinsic part of this race to remain at number one because high TRP fetches more ads, which ultimately make a channel successful.

The news channel, which has been accused of manipulating TRP, is a Free To Air channel. For watching this channel, you need to pay any subscription fees. You should always keep in mind that when you do not pay money for a product, then you yourself become a product. Your likes and dislikes are auctioned and you are forced to watch one-sided news.

On the contrary, Zee News is a paid channel. We also get advertisements, but our advertisements scale is not solely based on the TRP but also on the trust of our viewers. The rate of ads running on that channel is decided on how long a TV channel is watched by the audience.

This is the reason that every TV channel is vying to become number-1. The new system was introduced in the year 2010 to find out what number a particular channel stood in the TRP. Since the credibility of the company which earlier released the TRP was under the scanner, the news agency was created under the guidelines of the Union Ministry of Information and Broadcasting.

The new agency, Broadcast Audience Research Council (BARC), consists of representatives from channels and Advertisers. It is the world’s largest TRP measuring agency. The BARC has installed 44,000 barometers across the country to assess the ratings of channels.

Of these 44,000 houses, where these barometers are engaged, nearly 1.80 lakh members reside. In a population of 135 crore people, the sample size is merely 0.1 percent or just one man out of 7500. Whatever programmes these 1.80 lakh people watch on the channels become a standard for all the channels to follow. Perhaps, this is the reason that every channel starts showing similar programmes many times.

For every channel, TRP is a compulsion as it determines the rate of advertisements. The higher the rating of the channel, the more advertisements it gets. This is why some channels have tried to manipulate this system. When the TRP system started, it did not intend to measure the popularity of a channel among viewers but was established for advertisers.

Currently, more than 400 news channels are running across the country. The news shown on these TV channels tries to gain from the current advertisement market of Rs 3,640 crores, while the total advertising market for TV is around Rs 32,000 crores.

JEE-Main 2021 likely to be pushed to this month; official announcement...

Strong markets for cultured meat across meat-reducing Germany and France

Dharmendra tweets on farmers’ protest, deletes post after getting trolled |...

India allows export of 25,000 tonnes of onions to Bangladesh on...