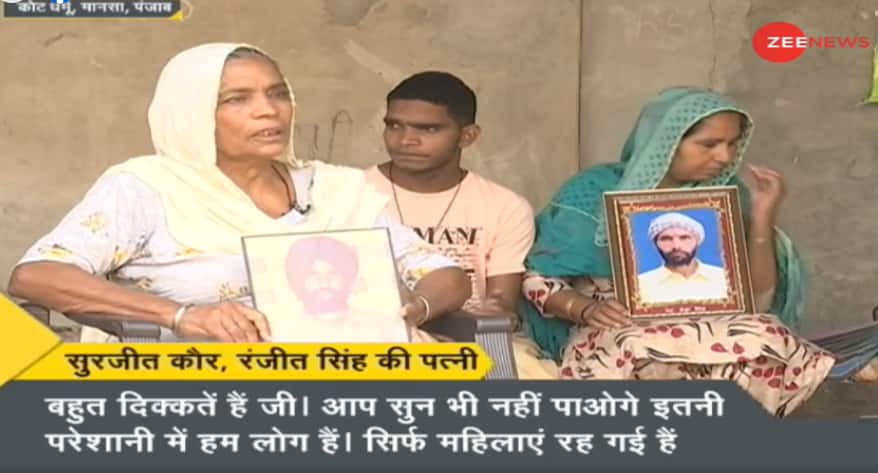 New Delhi: We all have heard from our childhood days that India is a country of farmers and Punjab is the happiest state of farmers because over 12 percent of the country’s total grain is produced here. This rosy picture often shown in films and described in stories is now turning into the saga of pain and suffering. There are several villages in Punjab where most of the male members have committed suicide due to debt, and people now term them as the villages of widows.

Zee News team visited such villages in Punjab and came out with startling facts. Over 3500 farmers have committed suicide in Punjab in the last 10 years and 97 percent of these deaths took place in the Malwa region of the state. As a result of this, the fields in Malwa where farmers once used to grow cotton, wheat, and paddy are now turning into their cemeteries.

The Zee News team visited such villages in the states where cases of farmers’ suicides are increasing rapidly. The first episode of this report is based on the Malwa region in Punjab, and the reality is painful that you would not feel pride in India being an agricultural country.

Although the Punjab government is opposing the new farm bills of the Central government, it has also failed to provide its farmers their due rights. Many times these farmers are compelled to sell their crops at a price lower than the minimum support price, thereby, not being able to even recover their cost. Punjab has gradually become the new abode of farmers’ suicide.

In 2019, as many as 10,281 farmers committed suicide in India, according to available data. The debt burden was reported to be the biggest reason behind these suicides. Of the total number of suicides in India every year, 8 percent are farmers. Indian farmers have burdened with an average debt of Rs 1.10 lakh. This amount may appear a small amount to you, but to earn this amount farmers wait for months to see their crop grow in their fields. They often fail to repay their loan installments along with domestic expenditure.

Farmers’ community is considered to be the biggest vote bank for political parties, but the moment a farmer commits suicide his death is merely turned into a government file for compensation.

In Kot Dharmu village of Mansa in Punjab where Nazar Singh committed suicide has merely memories preserved in his family. The tree under which Nazar Singh once taught his son skills of farming is a silent witness to the tragic demise of father and son Ram Singh, who also ended his life this year as the family was unable to repay the farm loan of Rs 4 lakh.

The story is not limited to one family in village Kot Dharmu, there are many other families where male members ended their lives by suicide due to the burden of farm loans. The family of Ranjit Singh is yet to forget his death. He had also taken a farm loan that rose up to Rs 11 lakh as he was unable to repay it due to his son’s illness and one day his body was found hanging from a tree in his field.

In a nearby Bhamma village, there is no male member left in the family of Gurpiyar Singh, who left behind his wife and two daughters. The family is striving hard to get rid of this debt besides ecuring the life of her daughters.

It may be noted that efforts are being made to stop the suicide of farmers, but this is proving to be an uphill task in the absence of timely help.

Malkit Singh of Kot Dharmu village told Zee News that the Malwa region of Punjab is now becoming infamous for the suicide of farmers. There are 4000 voters in this village but about 20 to 25 farmers have committed suicide. It is also alleged that farmers are compelled to sell their crops like cotton at less than the minimum support price. Apart from this, weather and poor system at times leave no option for farmers but to commit suicide.

Gagan Deep Singh, Manager Markfed, Mansa grain market, told Zee News that there are many schemes to compensate the farmers who committed suicide, but most of these plans are restricted to merely papers.

ByteDance says China will have to approve its US TikTok deal...

Unlock 5.0: Colleges, universities to reopen in Uttar Pradesh from this...