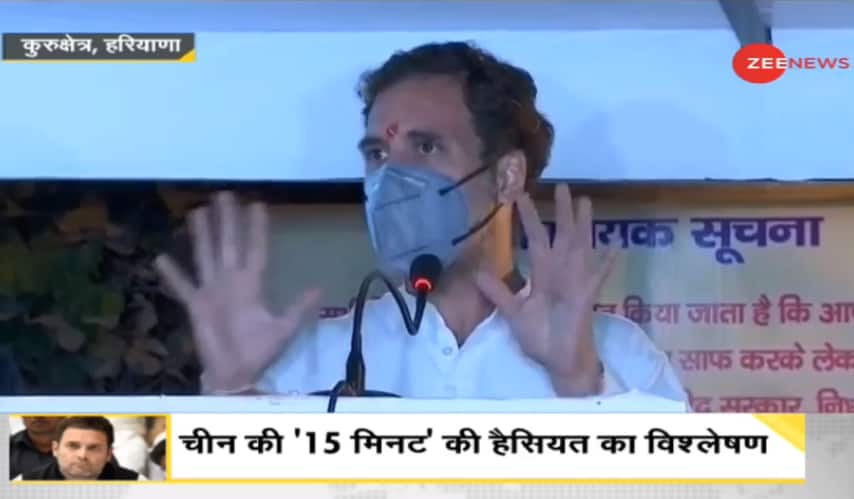 New Delhi: Even as Congress ruled the nation for over five decades and faced Sino-India wars in 1962 and 1967, its leader Rahul Gandhi forgets this fact and dares Prime Minister Narendra Modi to clear his stand on India’s border standoff with China. He also said that had the UPA been in power, China would not have dared to look at India with an evil eye.

The former Congress president also claimed that China “dared to enter India and kill our soldiers” as PM Modi has “weakened” the country. During the led UPA’s rule, Rahul said, “China would not dare to take a step inside our territory”, adding “we would have evicted and thrown out China and it would not have taken 15 minutes to do so” if the UPA had been in power.

Rahul made these remarks while addressing his final public gathering as part of his ‘Kheti Bachao Yatra’ in Haryana’s Kurukshetra. “There is only one nation in the entire world whose land has been usurped and that is India and they call themselves patriots. The Prime Minister calls himself ‘desh bhakt’ (patriot) and the whole country knows that China’s forces are inside our territory, what kind of patriot he is?” Rahul Gandhi added.

In the light of Rahul Gandhi’s comments, we should not forget that when China invaded India in the year 1962, the PLA occupied a large area of India, and the then Prime Minister Jawaharlal Nehru failed to do anything. His grandson Rahul Gandhi, however, stated that had his party been in power it would have not only driven the Chinese army in just 15 minutes but would have also pushed them back by 100 kilometers.

Rahul Gandhi has been making such statements even before, but his remarks hold a significance because he is an MP and his party considers him to be the future Prime Minister. The DNA report, therefore, delved deep into his statements to make you understand how the issue related to national security are being politicised.

The Zee News would like to remind Rahul Gandhi of the era when his party was in power, and the then Defence Minister AK Antony told Parliament (on September 6, 2013) that the policy of Congress governments has been not to develop infrastructure in the border areas. Antony further added that this policy, however, failed to bear fruit and China infiltrated India, taking advantage of it.

In 1962, the Chinese army took over the entire Aksai Chin area of ​​India, occupying ​​about 38,000 square kilometers. In terms of area, it is equal to countries like South Korea and the UAE. A year later in 1963, Pakistan gifted approximately 5180 square meters of POK land to China. Both of these incidents took place when Jawaharlal Nehru, Rahul Gandhi’s maternal grandfather, was the Prime Minister of India.

Prior to 1962, China has been expressing its claim over about 90,000 square kilometers of land in Arunachal Pradesh, but the Indian Army is now vigilant against the Chinese army’s misadventure.

China has been making small incursions in Ladakh from time to time but failed to occupy any tract. Between 2010 and 2013, the Chinese army once again intensified infiltration. The National Security Advisory Board prepared a report in 2013, claiming that the Chinese army occupied 640 square kilometers of eastern Ladakh. An uproar was witnessed over this report but it was rejected by the UPA government.

This was the time when Manmohan Singh was the Prime Minister and Sonia Gandhi, the mother of Rahul Gandhi, was termed as the Super-Prime Minister. Rahul Gandhi himself was an MP in 2013. He had a chance to push back China by 100 km, but Rahul failed to take such action.

Jawaharlal Nehru, who died in 1964, served as the Prime Minister of the country for nearly 16 years. He always supported good relations with China but was betrayed in return.

Rahul Gandhi’s father Rajiv Gandhi also served as Prime Minister of the country for 5 years, but during his entire tenure, he not even once tried to ask China to withdraw from Aksai Chin.

Notably, the soft attitude of the Congress governments towards China encouraged the Chinese army to infiltrate into Indian territory. The Central government, for the first time in the year 2017, disclosed under the Right to Information that China has illegally occupied a total of 43,180 square kilometers of Indian land.

Due to the Chinese occupation of Aksai Chin, the border between India and China has now been reduced to about 2000 km, while it should have been 4056 kilometers long as per the actual map.

Multinationals’ supply chains account for a fifth of global emissions

Want to eat Fresh Alphonso mangoes in December? You will have...

Converting of religion only for sake of marriage is not valid:...

People will not vote in PM Narendra Modi’s name, your performance...