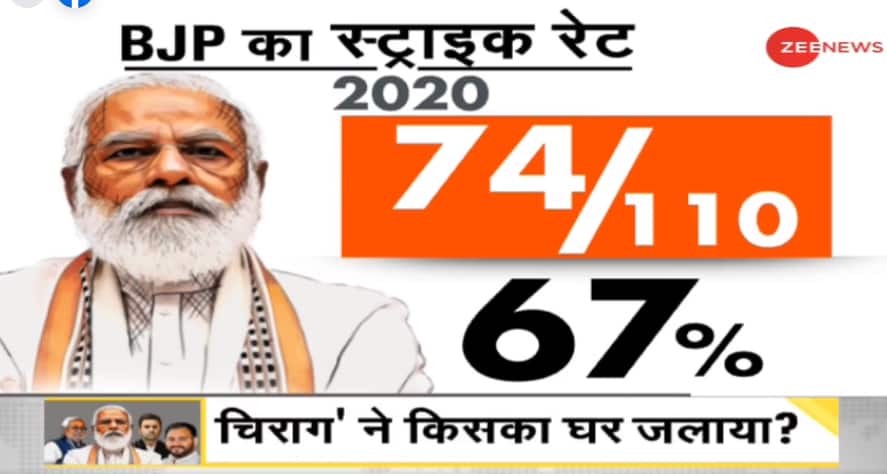 New Delhi: Prime Minister Narendra Modi is perhaps the only leader in the world whose popularity has increased during the coronavirus, otherwise the head of several states have faced severe criticism in their respective nations. The alleged mismanagement to control the deadly pandemic is understood to have dethroned Donald Trump.

The results of the Bihar Assembly elections, however, gave a message that people have liked Prime Minister Narendra Modi’s work to deal with the coronavirus crisis. After Bihar election results, a new environment has come to the fore in the country that opposition leaders are afraid of assailing the Prime Minister in their speeches. They even fear to criticize PM Modi, as they feel people will turn against him. This is a historic moment for our country, which is witnessing it for the first time in the modern era.

Prime Minister Narendra Modi on Wednesday asserted that results of the Bihar assembly polls and by-polls across states have proved that “development” will be the only basis for politics in the 21st century and credited women for powering the BJP’s political fortunes as its “silent voters”.

Addressing BJP workers at a thanksgiving programme, he also mentioned Silent Voters in his speech today, he said that India’s “Nari Shakti” (women power) are the BJP’s “silent voters” being discussed by experts, adding that they have played a key role in the BJP’s good show in polls everywhere, from rural to urban regions.

The NDA has won 125 seats in the Bihar election, three more seats than the requisite majority figure, while the Mahagathbandhan with 110 seats is in the second place. Some experts opine that RJD’s Tejashwi Yadav has put forth the most spectacular performance in these elections.

On the contrary, RJD contested 101 seats in 2015 and won 80 seats, but this time it contested 144 seats and won merely 75 seats, showing that RJD’s strike rate is much lower than the previous time. It was around 80 percent in 2015, and the same has come down just 52 percent. This clearly shows that the RJD had contested on 43 more seats but could win merely 5 seats more than the last time.

Chirag Paswan’s party LJP, however, was not part of the NDA in the Bihar Assembly election. The LJP’s vote share was around 6 percent, and it could win merely one seat. It facilitated the RJD to gain 23 seats as the NDA’s 6 percent vote share was cut. Had Chirag Paswan not contested out of the NDA, the RJD could have won around 50 seats and its strike rate would have been 35 percent.

Congress has performed worst in the Bihar Assembly elections, though it contested on 70 seats, and managed to win only 19 seats with a strike rate of only 27 percent. In 2015, it had won 27 seats by contesting 41 seats, and Rahul Gandhi’s strike rate then was 66 percent.

The BJP has, thus, given an excellent performance in terms of winning Assembly seats. It also emerged as the elder brother in these elections, but according to the promise made before the election, Nitish Kumar will be the next Chief Minister of Bihar.

It may be noted that along with the Bihar Assembly election, there were by-elections in as many as 59 assembly seats in 11 states. BJP has won 40 seats out of 59. These 40 seats are in the six different states of Uttar Pradesh, Madhya Pradesh, Gujarat, Telangana, Karnataka, and Manipur, proving that the entire nation still reposes faith in Prime Minister Narendra Modi’s leadership.

The BJP is striving hard to expand its base in South India, but it has failed to taste success in other states except for Karnataka. In such a situation, the party’s victory in one assembly seat of Telangana is the talk of the town. In the 2019 Lok Sabha elections, though BJP did well in Telangana and won four Lok Sabha seats.

Vampire bats social distance when they get sick

Rice ATM in Hyderabad, 12,000 people given free supplies since lockdown...