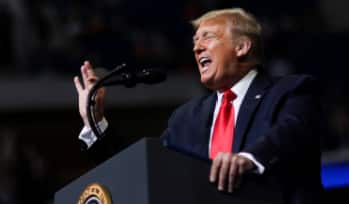 Washington: Donald Trump on Saturday declared himself as the winner of the November 3 presidential election, even as major American media outlets projected his Democratic rival Joe Biden as next president of the United States. “I WON THIS ELECTION, BY A LOT!” tweeted Trump as major American media outlets declared that he has lost the election and Biden would be the 46th president of the United States.

Twitter immediately flagged Trump’s tweet saying that “official sources may not have called the race when this was tweeted. Trump also repeated his allegations of electoral fraud by claiming without evidence that “bad things happened” inside the counting rooms and tens of thousands of votes were illegally received in the key battleground state of Pennsylvania.

The president has repeatedly attempted to question the validity of vote counts in key swing states and made unfounded claims that the election is being “stolen” from him.

“Bad things took place during those hours where LEGAL TRANSPARENCY was viciously & crudely not allowed. Tractors blocked doors & windows were covered with thick cardboard so that observers could not see into the count rooms. BAD THINGS HAPPENED INSIDE. BIG CHANGES TOOK PLACE!” he said in a tweet.

Four days after the November 3 presidential election, votes were still being counted in several key battleground states. “This would ALSO change the Election result in numerous States, including Pennsylvania, which everyone thought was easily won on Election Night, only to see a massive lead disappear, without anyone being allowed to OBSERVE, for long intervals of time, what the happened,” Trump said.

Although the president led in Pennsylvania on election night, his lead over Biden has been cut down and overturned following further counting of mail-in ballots.

“People were screaming STOP THE COUNT & WE DEMAND TRANSPARENCY (As Legal Observers were refused admittance to count rooms)!” Trump said in another tweet.

President Trump at a White House news conference on Friday accused the Democrats of massive ballot fraud and alleged that the election was being stolen. He did not offer any evidence to back his claim.

His campaign has filed multiple lawsuits in the States of Pennsylvania, Michigan, Georgia, and Nevada and has demanded a recount of votes in Wisconsin. The Biden campaign has denied the allegations.

Immune checkpoint inhibitor efficacy against glioblastoma may decrease with dexamethasone

‘Aliens are real and Trump knows about them’: Israel-ex space boss...

Baby sets a new ‘record’ after being born from 27-year-old embryo...