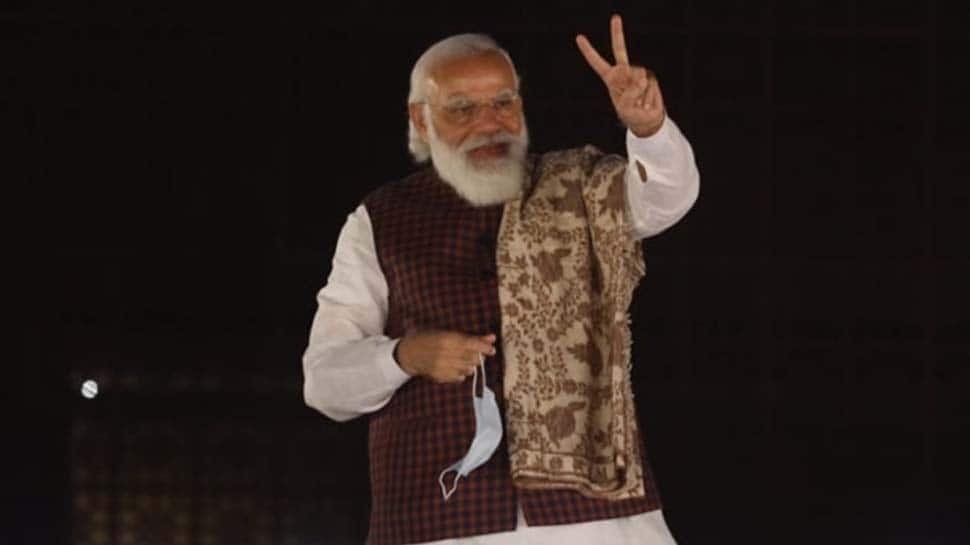 Prime Minister Narendra Modi on Wednesday hit out at dynastic parties saying they are the biggest threat to the democracy and rued that even a national party had fallen prey to it.

Addressing party workers at a felicitation function after the BJP’s victory in Bihar elections and various bypolls, the prime minister launched a stinging attack on “family parties and family-oriented parties”.

In his address, the PM said that their “web” could be seen from Kashmir to Kanyakumari and that they are the “biggest threat” to Indian democracy. In a clear attack on the Congress, he said a national party has also fallen into the grip of a family and asked youngsters to associate themselves with the BJP to serve the country.

PM Modi said the poll results in Bihar and other bye-elections across the country have made it clear that people will now support only those who work honestly for development. “People have decided that development alone will be the basis of national politics in 21st century,” he said.

Everyone must be wondering when he will speak on the Bihar poll results, PM Modi said smilingly in the middle of his speech before adding that the only mystery formula behind the NDA’s win in the state, where exit polls had mostly predicted a loss for it, was its mantra of “sabka saath, sabka vikas, sabka vishwas”.

The PM also said those who cannot fight the BJP democratically have resorted to murdering the party’s workers. “This killing game cannot work in a democracy,” he said. Assembly polls are due in the first half of 2021 in West Bengal, a politically crucial state where BJP hopes to come to power for the first time by ending Chief Minister Mamata Banerjee’s 10-year old rule.

“People in some parts of the country think that they will realise their goals by murdering BJP workers. I will appeal to them to see reason… I need not warn them as people will do this. Polls come and go, win and loss happen but this killing game cannot work in a democracy. This ‘maut ka khel’ cannot get you votes. They should see the writing on the wall,” PM Modi said, without naming any party.

The BJP has been accusing the TMC of resorting to killing its workers to terrorise its members, a charge the state’s ruling party has rejected.

Lauding the people of the country for reposing their faith in the BJP, the prime minister also thanked and praised the Election Commission, security forces and administration for the peaceful and successful conduct of elections. These poll results have broadened the outcome of Lok Sabha elections, the prime minister said referring to BJP’s success in polls and bypolls across the country.

“BJP is the only national party in which poor, Dalits, deprived see their representation; only BJP understands the need of every section, region. The poll results have endorsed the way we have tackled COVID-19 pandemic,” he said.

Terming the Bihar polls results as “most special”, he noted that the BJP is the only party which has seen its tally increase despite being in power in the state for three terms and added that it has performed spectacularly in states like Madhya Pradesh and Gujarat despite ruling them for long.

“With pollsters crediting woman voters’ preference for the BJP-JD(U) alliance for its win in the hard-fought battle, Modi said India’s “nari shakti” (women power) are the BJP’s “silent voters” being discussed by experts. From rural to urban regions, they have played a key role in the BJP’s good show in polls everywhere, he added.

PM Modi also said that the NDA will serve Bihar under the leadership of Chief Minister Nitish Kumar every BJP member will leave no stone unturned to help it realise its resolve of development in the state.

The prime minister chose the celebratory atmosphere at the BJP headquarters to underscore the party’s growing strength across the country, a day after its stupendous show helped the NDA pip a resurgent RJD-led alliance to the post, even as it notched up impressive wins in bypolls across states like Madhya Pradesh, Gujarat, Karnataka, Telangana and Uttar Pradesh among others.

PM Modi said the party’s rise from “two rooms and two seats” to its dominance in national politics now has clearly shown that people will give only those a chance to serve the country who work honestly for the nation’s development. Those who do not understand it are losing their deposits in polls, he said, an apparent reference to the Congress’ poor show in these polls.

The BJP’s model of “good governance” was visible during the COVID-19 pandemic, he said, asserting that people’s vote for the party has shown their support to the measures taken by his government to deal with the pandemic.

The prime minister asked people to take due care while celebrating Diwali and follow the mantra of “vocal for local”, a push for local products. He also hailed the Election Commission, security forces and local administration for the successful conduct of elections, saying India’s polling process is a pride of every Indian.

Amid a festival-like atmosphere with the crowd chanting ‘Modi hai to mumkin hai (Modi can make it possible), BJP president J P Nadda earlier said at the event that people of Bihar have put their stamp of approval on Modi’s work to deal with COVID-19 and help poor during the pandemic. He also said Bihar has chosen ‘vikas raaj’ over ‘goonda raaj’, ‘DBT raaj’ over ‘loot raaj’ and LED over lantern.

Healthy muscles are a carrot on a string for healthy lungs