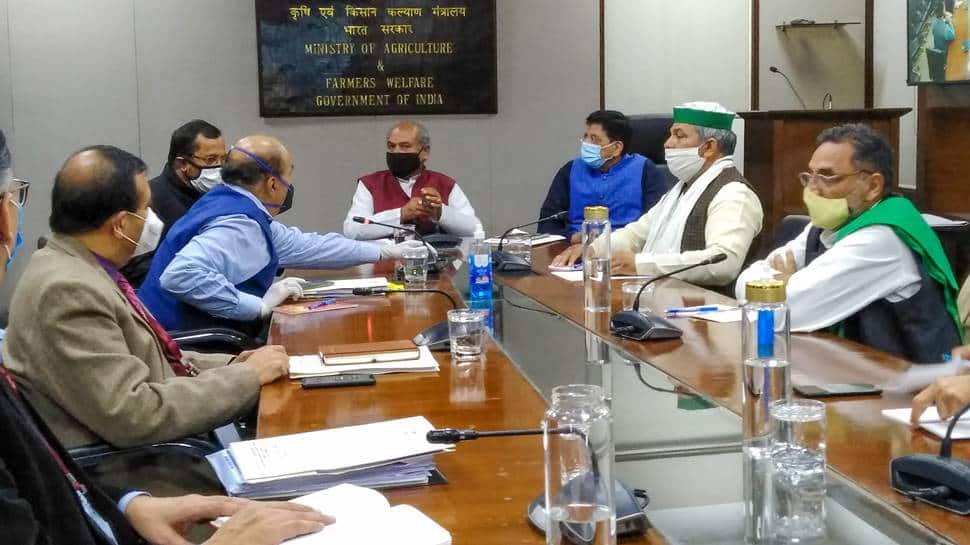 New Delhi: The Centre on Tuesday held a meeting with the representatives of 35 farmer organisations that have been protesting agianst the Centre’s three new farm laws. The government offered to set up a committee to look into the demands of protetsting farmers against the new farm laws. The proposal received a cold response from the Kisan unions. The farmers’ organizations are demanding that the all three new agricultural laws be revoked.

Here’s what happened during talks between Centre and farmers’ union:

The meeting at Vigyan Bhawan was attended by Union Minister of Agriculture, Narendra Singh Tomar, with Minister of Railways and Commerce and Industry Piyush Goyal and Minister of State for Commerce Som Prakash (who is an MP from Punjab) and the representatives of protesting farmer organisations.

During the meeting, the Union Ministers conveyed to the farmers the benefits of the Acts brought to improve the agricultural sector. The farmers` representatives, however, termed the laws as contrary to their interests.

Union minister Tomar proposed to set up an expert committee to discuss the issues of farmers but the farmers` representatives rejected the government`s proposal maintaining that all the delegates will go through further discussions to resolve the matter. They demanded that the MSP be given in a written legal form. They said that they are open for a dialogue, but the movement will also continue till a solution is found.

What did the Centre say?

The government sought the farmers’ objections to the three bills as well as their suggestions and asked them to submit it in writing. The government has asked the farmers to submit the written document on Wednesday, so that it could be taken up for discussion on Thursday, December 3.

DNA Exclusive: Can spreading ‘hate’ in name of anti-France protest be...