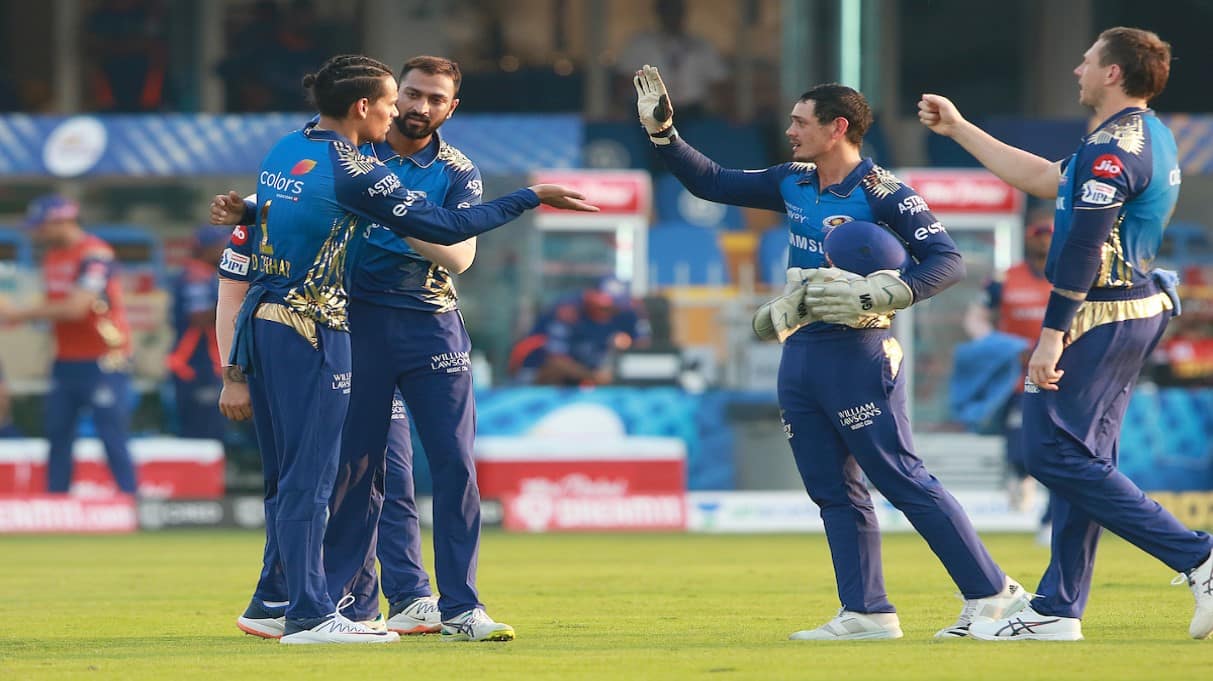 Mumbai Indians have looked like the strongest contenders for the title right from the early goings up until this point where they are still the favorites in the upcoming IPL 2020 Final against Delhi Capitals.

We look at Mumbai Indians journey in the competition thus far – the 15 games they played to reach this grand stage.

Mumbai started off their tournament with a dismal loss to CSK by 5 wickets in the IPL 2020 opener. Put into bat, Mumbai looked rusty and managed just 162 on the board and Ambati Rayudu’s 71 ensured that CSK won this repeat game of last year’s final.

Again put into bat, this time Mumbai put up a handsome total of 195/5 with skipper Rohit Sharma scoring 80 off 54 balls. A disciplined bowling performance ensured that KKR were bundled out for just 146/9 – giving Mumbai their first win of the season.

Match 3: lost to RCB in Super Over

Bowling first, RCB’s De Villiers, Finch and Padikkal’s half-centuries powered them to a majestic 201/3 and in reply Ishan Kishan’s magnificent 99 and Pollard’s 60 off 24 balls were enough to tie the score. In the ensuing Super Over, Mumbai could only manage 7/1 against Navdeep Saini and RCB won on the final ball of their Super Over

Put into bat, Rohit Sharma scored 70 off 45 balls while Pollard and Hardik provided the late blitz and Mumbai posted a handsome 191/4 while Kings XI Punjab in reply could manage only 143/8.

Batting first, Mumbai’s dream run with the bat continued as they posted 208/5 with Quinton de Kock scoring 67 off 39 balls. Krunal Pandya scored a 4 ball 20 at the expense of SRH’s Siddharth Kaul to take Mumbai into the driver’s seat. Chasing the target, SRH could only muster 174/4 despite skipper Warner’s half-century.

Batting first for the third consecutive game, Mumbai posted a solid 193/4 thanks to Suryakumar Yadav’s 79* and then Bumrah bowled a tremendous spell (4/20) to finish of the Rajasthan innings in just 18 overs despite Jos Buttler’s 70.

Being asked to bowl, a combined bowling effort ensured that KKR were never allowed to hit freely as they could only muster 148/5 and Mumbai Indians chased down the target easily with de Kock scoring an unbeaten 78*.

Match 9: lost to KXIP in IPL’s first ever Second Super Over

Mumbai Indians run of five consecutive wins ended with this game as they lost out to an inspired KXIP side. Batting first, Mumbai put on 176/6 with de Kock’s fifty and chasing the total, KXIP also managed 176/6. In the ensuing Super Over, both sides could only manage 5 runs which led to a first-ever second Super Over. Mumbai Indians scored 11/1 in their second Super Over but in reply KXIP took home the win with Chris Gayle and Mayank Agarwal finally hitting the winning runs.

Bowling first, Mumbai went right through CSK’s batting with Boult wreaking havoc with a spell of 4-18 as Dhoni’s CSK managed to score just 114/9. Chasing the small total, Mumbai’s Ishan Kishan and Quinton de Kock single-handedly took their side home with a 116-run opening stand. Rohit Sharma missed out with a hamstring injury.

Batting first, Mumbai posted a huge 195/5 thanks to Hardik Pandya’s 21 ball 60 and notable contributions from Suryakumar and Ishan Kishan. In reply, Ben Stokes carried his bat, scoring a majestic 107* as Rajasthan chased down the target in just 18.2 overs.

Bowling first, Bumrah bowled a mesmerizing spell of 4-1-14-3 as RCB posted a competitive 164/6. Suryakumar Yadav scored a clinical 79* to take his side home with five balls to spare.

Bowling first, Mumbai’s decision proved unerring as Delhi’s batting was ripped apart by Bumrah and Boult who picked up three wickets apiece and in reply- Ishan Kishan scored 72* and took his side home by 9 wickets.

This was Mumbai’s biggest defeat of the tournament but it must be noted that three of their biggest stars Bumrah, Boult and Hardik were all rested for this one. Mumbai managed just 149/8 and SRH openers Warner and Saha took the side home after a huge 151-run opening partnership.

In a match between the top two sides, on the big stage of the IPL 2020 Playoffs – Mumbai decimated Delhi. Being put into bat, Ishan Kishan and Suryakumar Yadav’s half-centuries and Hardik Pandya’s 37 off 14 balls steered Mumbai to a huge 200/5 and then Jasprit Bumrah took over. He bowled a spell of 4-1-14-4 and Delhi never recovered – losing the game by 57 runs

Amazonia-1, 18 co-passenger satellites onboard PSLV-C51 to be launched by ISRO...

From Gaga to Garth, Miranda to Moreno, A-list celebs who will...

Memories create ‘fingerprints’ that reveal how the brain is organized

Working hours to be limited to 8 hours a day; overtime...