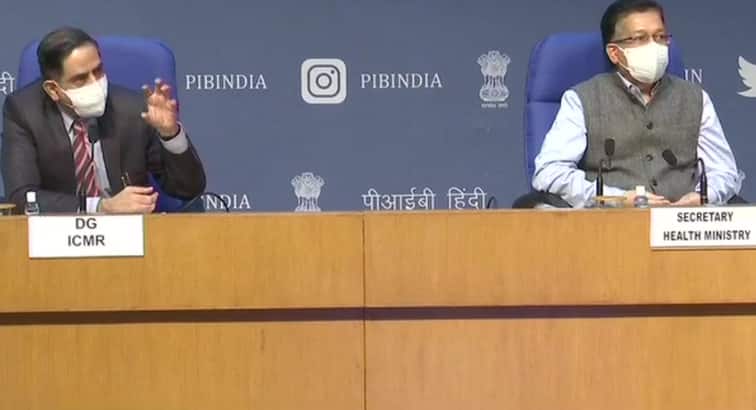 New Delhi: Union Health Ministry on Tuesday (December 1) said that the government doesn`t intend to immunise each individual with the Covid-19 vaccine during a press briefing. Prof Balram Bhargava, Director General (DG) of the Indian Council of Medical Research (ICMR) said that the government aims to break the chain of the virus first by vaccinating a critical mass of the population.

Prof Balram Bhargava said, “Our purpose is to break the chain of the virus. If we are able to vaccinate a critical mass of people and break virus transmission then we may not have to vaccinate the entire population.” He further said that the efficacy of the vaccine is an issue leading to hesitancy among the people to undergo the vaccination since it may remain 60% effective in some individuals while it may reach 70% efficacy in others.

Stressing upon the importance of masks, Bhargava said it is vitally important now and will continue to be even after the vaccination. “Since we would be starting the vaccination with a small population, the use of masks has to be continued as it is effective in breaking the chain of the virus,” he explained.

During the press briefing, Union health secretary Rajesh Bhushan said, “There is an inherent issue of vaccine hesitancy which may have nothing to do with adverse events. A section of population thinks that it does not require vaccination.”

Bhushan informed that the government is preparing detailed guidelines regarding vaccine administration which may come within the next two weeks, adding “One of the issues mentioned in the guidelines deals with the aspect of vaccine safety. Our aim is to tell people what would be the effect and benefit of taking a vaccine to a person and at large.”

Talking about the initial assessment of the two adverse events, which came to light recently during the clinical trials of two vaccine candidates — Covaxin and Covishield, Bhargava said it did not demand stoppage of the trials.

He further said, “It is important to remember that adverse events are bound to occur in drugs, vaccines or any other health interventions. It`s the role of the regulatory body, which in India is Drug Controller General of India (DCGI), to ascertain or refuse any causal link to the event and the intervention after collating all the data. The initial assessment of reported adverse events did not necessitate the stoppage of the vaccine trials.”

The statements have come in the wake of the two adverse events, one during the Phase I clinical trial of Bharat Biotech and ICMR sponsored Covaxin, and the other during Phase I and II trials of the Serum Institute of India sponsored Covishield, which came to the light recently. The manufacturer and the volunteer, both have sent legal notices to each other in the matter.

In the case of Covishield, a Chennai-based volunteer was diagnosed with acute neuro-encephalopathy, which has allegedly been linked as a side-effect of the Covishield shots that he took on October 1.

Initially, the volunteer sent a legal notice to the SII and demanded Rs 5 crore compensation for the neurological complications he developed after being administered the test dose. The company later denied the link between the complications and the vaccine dosage.

In a counter, the SII also sent a legal notice to the volunteer demanding Rs 100 crore for damaging the company`s reputation through reporting an alleged serious adverse event which is unrelated to the test dose administration of Covishield that he underwent.

In the case of Covaxin, Bharat Biotech, an adverse event in a volunteer occurred during the Phase I trials in August which the company did not promptly admit to the public. The volunteer, with no comorbidities, developed viral pneumonitis. This occurred after he was given a dose of the Covaxin shot.

Rajesh Bhushan clarified that the adverse events would not impact the timeline of Covid-19 vaccine rollout. He did not comment on the two aforementioned adverse events.

US Wisconsin governor declares state of emergency as violence erupts in...

South Africa set to play Test in Pakistan after 14 years...

Encounter in J&K’s Srinagar, search operation on for trapped terrorists |...