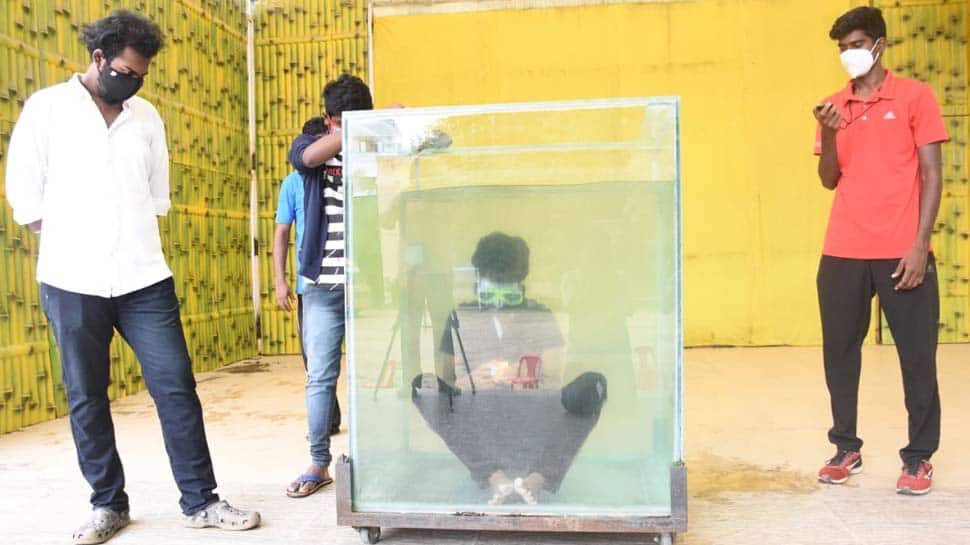 Chennai: It is one thing to solve a Rubik’s cube under normal circumstances, but completely another to hold one’s breath and do this skill-intensive activity back-to-back while sitting underwater. “It took over a year of practice to get the breathing right while cubing at high speeds,” said Illayaram Sekar, who holds multiple Guinness worlds records in cubing.

The latest feat is his sixth Guinness world record and his most special yet- Sekar has solved six Rubik’s cubes in 2 minutes 17 seconds while being submerged in an enclosed glass tank. Sekar’s latest record was successfully attempted on August 1, exactly six years after a similar attempt using five cubes by an American was recognized as a Guinness world record in 2014.

“I was pursuing my college education and was in my second year back then, I aspired to beat that record as a college student,” Sekar recalls. An avid cuber since 2013, he claims to have learnt all of his tricks from the internet, improving them with every record.

Working as a Rubik’s cube trainer at a private school in Chennai, Sekar has many Guinness records to his credit. But the latest one stands out, as the Guinness team had themselves reached out to him and certified this record, after seeing media reports about the same. It is said that it takes a minimum of three months for Guinness to approve a record and announce it, but in Sekar’s case, the team certified it, barely within six days of it being submitted.

Having trained himself to solve hundreds of cubes back-to-back, Sekar still feels that solving six cubes underwater was an all-new experience, with its own set of complications. “It’s easy to hold breath and stay underwater for a couple of minutes, but it is really hard to do so when our mind and fingers are working at rapid speeds for cubing,” he said.

The conditions for the record also strictly mention that every new cube must be revealed only after the previous one is solved, and if a cube slips out of hand and returns to surface, the attempt is not considered. This meant that he had to grip the cubes hard, as opposed to a light grip during normal cubing. For Selvam, solving a cube in under 9 seconds is a cake-walk, but it takes about 20 seconds to do the same while submerged.

So how did he manage to completely solve 6 cubes? His year-long training regimen for breath control included ‘Pranayama’ and a two-hour session of underwater practice every day. “The trick is to keep the mind calm while cubing, as getting agitated will deplete oxygen. It took me months of hard work to solve every additional cube underwater and the progress was slow,” Sekar said.

When asked if he trains for enhanced underwater breath control at swimming pools, Sekar laughs, adding that he doesn’t know swimming and always does his practice at the shallow end of the pool. This was among the reasons why he fabricated a 5-feet deep glass tank in 2019 to help in his practice. It was eventually the same tank in which he performed the record attempt.

He believes that cubing can be an extremely satisfying hobby when inculcated at a young age. As a trainer who works with school students, he points out that cubing has an immense impact on honing mind-eye-hand coordination. “This is an activity that requires both hands to move extremely fast and is something that requires skill, technique and a sharp-attention,” said Sekar.

His earlier Guinness Records involved solving cubes while being suspended heads over heels, while riding a bicycle, among others. He had even trained 4000 students in his school for a mass cubing event, which also was recognized by the Guinness records. So what’s next? He says, he’ll be cubing while riding a unicycle.

Akshay Kumar sir thought I could shoulder it on my own,...

Do you know these popular brands are actually Chinese? | Companies...

COVID-19: This school decides to shut down schools for classes 1...