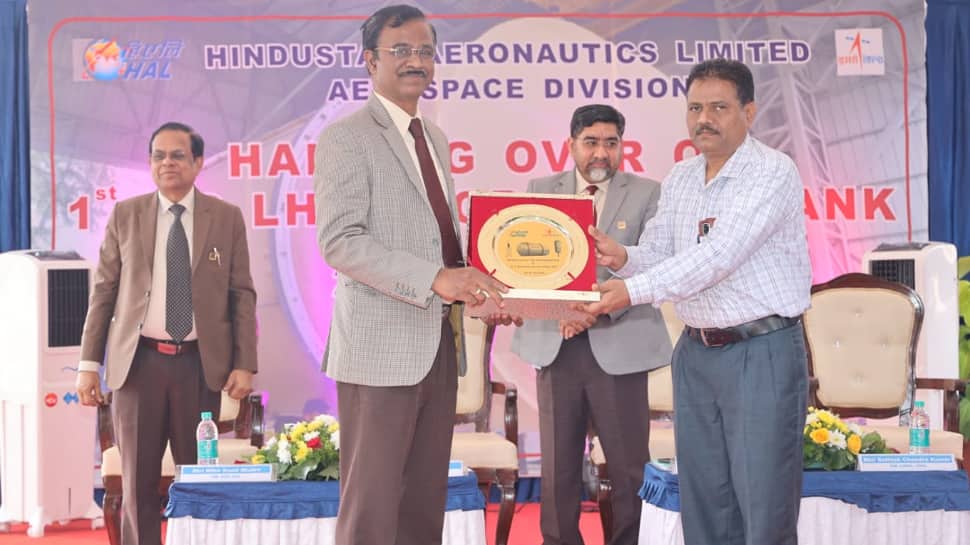 Hindustan Aeronautics Limited (HAL) on Monday said that it has delivered the biggest cryogenic propellant tank (C32 LH2) ever fabricated by the company to Indian Space Research Organisation (ISRO). It added that this was much ahead of the contractual schedule at a program held in Bengaluru recently.

The C32-LH2 tank is a developmental cryogenic propellant tank of aluminium alloy designed for improving the payload capability of GSLV MK-III launching vehicle.

The four-meter diametric tank is of eight-meter length to load 5,755 kg propellant in the 89 cubic meter volume. The total length of weld carried out in the tank was 115 metre at different stages to the quality requirement of 100 per cent tests on radiography, Die penetrant check and leak proof.

HAL said that it has mastered the skills and technologies required for fabricating welded propellant tank of Aluminium ally to such stringent quality requirement.

The propellant tank was handed over by HAL Director (Operations) M S Velpari to ISRO Director (LPSC) Dr V Narayanan in the presence of Director (VSSC) S Somanath with other senior scientists from ISRO, participating in virtual mode and other senior officials of HAL.

Somanath acknowledged HAL’s contributions to India’s space program as one of the valuable partners of ISRO in its long journey. He appreciated HAL’s capability in absorbing any technological advancements and developments in producing any types of space hardware and structures for the space launch vehicle.

Somanath highlighted HAL’s role in developing eco-system by sharing knowledge among private players towards strengthening the supply chain. V Narayanan while receiving the hardware, thanked the entire workforce of HAL for successful production of the developmental project.

Velpari reiterated HAL’s commitment to bring this mutual cooperation and support to the utmost level. He also explained HAL’s preparedness to venture into a complete realization of PSLV & GSLV launch vehicles progressively from raw material stage to launch stage including managing the entire supply chain of ISRO.

HAL said that as a strategic reliable partner, it has been associating with ISRO for the prestigious space programs since the last five decades. It added that it has supplied critical structures, tankages, satellite structures for the PSLV, GSLV-MkII and GSLV-MkIII launch vehicle.

Various new projects like PS2/GS2 integration, Semi-Cryo structure fabrication and manufacture of cryo & semi cryo engines are being taken up at HAL, for which setting up of necessary infrastructure & facilities is nearing completion.

It added that it has also supported ISRO right from the developmental phase of Crew Atmospheric Re-entry Experiment, PAD Abort test for Crew Escape for Human Space Mission and is currently building hardware for full-fledged launch vehicle GSLV Mk-III for Gaganyaan program.

Looking for alternatives for Oximeters? THIS mobile app will monitor blood...

Trains to Mumbai likely to be suspended amid spurt in COVID-19...

Dubai to host 4th edition of the WION Global Summit |...

Booking, cancellation of train tickets 5 minutes before departure from October...