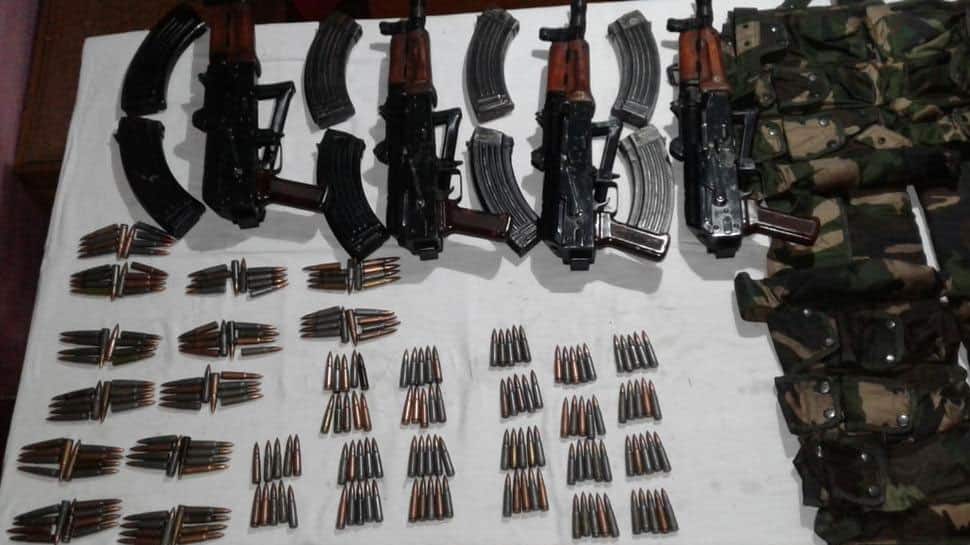 SRINAGAR: The security forces have seized a huge cache of arms and ammunition in several anti-terror operations in Jammu and Kashmir since March this year, which is yet another proof of Pakistan’s unabated sponsorship of terrorism in the Kashmir Valley.

Ever since the creation of the Union Territory of Jammu and Kashmir by the Narendra Modi government, after it scrapped the Article 370 last year, the security forces and intelligence agencies were given a free hand to deal with the scourge of terrorism in J&K.

As a result of it and due to meticulous planning and better coordination between the Indian Army, Central Armed Police Forces and intelligence agencies, there has been a drastic decline in terrorism in the Kashmir Valley and phased elimination of top terror commanders and their aides in various counter-terrorism operations.

However, this has put a huge pressure on the Pakistani Army and its spy agency ISI to devise more ways for funding ‘jihad’ in Kashmir and supplying more sophisticated weaponry to the terror outfits in PoK.

The recent seizure of modern weaponry from the slain terrorists and their hideouts busted by the security forces in Kashmir shows that the Pak-sponsored terrorism, backed with Chinese weapons, has made the counter-insurgency in Kashmir bloodier than ever. Pakistan has established smuggling networks over the last years into India and especially within the Kashmir Valley, so as to ensure a steady supply of narcotics and weapons.

According to Army sources, the ISI, with the help of China, is sending 200-300 Chinese-made rifles, Chinese bulletproof jackets and Chinese hand grenades via drones for terrorists in the Valley every month.

Due to increased surveillance and border patrolling by the Indian security forces, the Pakistan-backed terrorists have not been able to receive arms supply, which is why ISI along with China is helping them by dropping weapons using drones in the Valley.

The ISI had dropped arms in different areas of Punjab and Jammu and Kashmir through drones, as per the Army sources. The IB has also stated in its report sent to the Home Ministry that due to the increased vigilance of the Indian Army, police and intelligence agencies, Pakistan is unable to supply arms to the terrorists. The infiltration of terrorists has stopped to a large extent and this is why Pakistan is now taking help from China to keep terrorism alive.

And China, that has an ulterior motive ‘to dominate in PoK,’ is helping Pakistan with every possible means.

Many weapons recovered earlier from terrorists in Jammu and Kashmir were also manufactured in China. The drone technology for sending weapons across the border was also transferred to ISI on behalf of China, according to the Army sources.

The arms recovered by security forces carry the hallmark of China. Chinese weapons were also found among the weapons sent by drones in Akhnoor, Hiranagar, Poonch and other areas of Jammu. Apart from this, Chinese-made weapons have also been recovered from terrorists killed in Kashmir.

The seriousness of the situation can be understood from the fact that the security forces have recovered 97 NSR rifles, made by the Noriko Company, which are generally used by Chinese soldiers. In September, the Chinese-made rifles were also found with the terrorists who were killed in the infiltration in Gurez.

Your money is safe, will be back soon on Google Play...

Maanvi Gagroo on how she became more comfortable with her body...

Over 1 kg gold concealed under seat track of IndiGo flight...