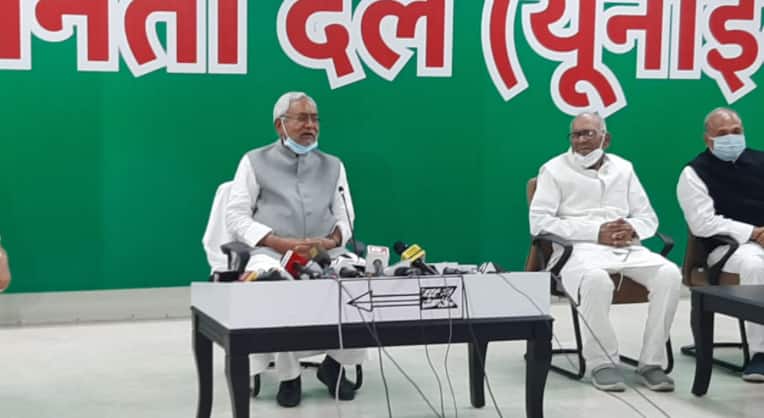 New Delhi: Bihar Chief Minister Nitish Kumar said on Thursday (November 12) that he has made no claim to form the next government in his first interaction with media persons after the results for the recently concluded Assembly election were announced.

The JD(U) Chief, Nitish Kumar said voters have given the alliance the mandate and it will form the government, adding the decision on the date of swearing-in will be taken after an informal meeting with NDA partners on Friday.

Chief Minister Nitish Kumar said, “I have made no claim, the decision will be taken by NDA when asked, “Who will be the CM?” He further said that they are analysing the results of this election, adding that members of all four parties will meet tomorrow.

On Chirag Paswan’s Lok Janshakti Party (LJP), which has been accused of “cutting votes” against the JD-U’s and damaging its prospects, Nitish Kumar said, “If some action is to be taken (against LJP), the BJP has to take it. It’s for the BJP to decide whether or not the LJP should be retained in the NDA.”

It may be noted that Nitish Kumar has to tender his resignation to the governor before his swearing-in as the next Chief Minister of the state. The newly-elected MLAs of the NDA are yet to meet formally to elect him as their leader.

Earlier in the day, Mahagathbandan leader Tejashwi Yadav said that the RJD would soon undertake a `Dhanyawaad yatra` to thank supporters for showing faith in the grand alliance which secured 110 seats, 12 less than the magic mark.

Tejashwi hit out at the National Democratic Alliance (NDA) claiming that it won the assembly election through money, muscle, and deceit (dhan, chhal and bal), adding that his party got the support of the people.

Meanwhile, Lok Janshakti Party chief Chirag Paswan will launch a `Dhanyawad Yatra` (a thanksgiving tour) after the festival of Chhath to express gratitude towards the voters who supported the party in the Bihar Assembly polls.

Issuing a statement, the LJP said, “We thank all the people of Bihar for the love, support, and blessings that `Bihar first Bihari first` received in the Bihar Legislative Assembly Elections 2020. This was the first time, the LJP fought the election alone and 25 lakh people blessed the vision document with a vote share of almost 6 percent.”

“To express our thanks, the party will take out a `Dhanyawad Yatra` (thanksgiving tour) in every district of the state. This journey will come after the Chhath festival,” the statement added.

In Bihar Assembly election 2020, of the 243 seats, 125 went in favour of the ruling coalition headed by Chief Minister Nitish Kumar, and 110 to the RJD-led Mahagathbandan. The RJD emerged as the single-largest party in the House with 75 seats while the LJP could win merely one seat.

Bihar assembly election 2020: Final phase to be the decider; here’s...

Doctor Dogs: How Our Best Friends Are Becoming Our Best Medicine