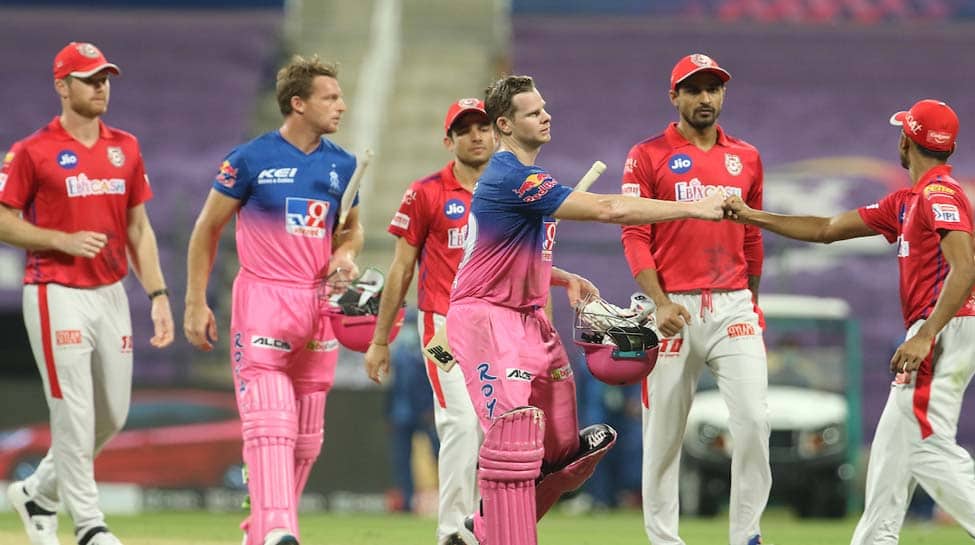 Chris Gayle’s blistering knock of 99 runs went in vain as Rajasthan Royals clinched a comfortable seven-wicket win over Kings XI Punjab to keep their hopes of making it to the playoffs alive in the 2020 edition of the Indian Premier League (IPL) at the Sheikh Zayed Cricket Stadium in Abu Dhabi on Friday.

Chasing a good target of 186 runs to win, openers Robin Uthappa and Ben Stokes provided a perfect start to the Rajasthan franchise by stitching a 60-run stand for the opening wicket.

Soon after bringing up his half-century off 24 deliveries, Ben Stokes (50) was caught by Deepak Hooda at mid-off on the third ball of the sixth over by Chris Jordan.

Uthappa and Sanju Samson then joined forces and the duo added 51 runs for the second wicket. While Uthappa departed for 23-ball 30 off Murugan Ashwin delivery, Samson fell just two runs short of a fifty following a direct hit by Mandeep Singh’s substitute Suchith in the 15th over.

Skipper Steve Smith (31) and Jos Buttler (22) then shared 44-run partnership for the fourth wicket to help Rajasthan Royals cross the mark in 17.3 overs.

Earlier, Gayle not only notched up a sublime knock of 99 runs off 63 balls, but also stitched a huge 120-run stand for the second wicket with skipper-cum-opener KL Rahul to help Kings XI Punjab post a total of 185 for four in their stipulated 20 overs.

En route to his knock, Gayle also completed 1,000 runs in the shortest format of the game.

Stokes was also adjudged ‘Man of the Match’ for his all-round performance.

The victory saw Rajasthan Royals climb up to the fifth spot from seventh place in the IPL 2020 points table. The Smith-led side now have six wins from 13 matches and are now standing just behind KXIP, who have same number of victories in hand but have better net run-rate than Rajasthan.

Jab We Met’s Anshuman aka Tarun Arora opens up on playing...

Here’s how to get free FASTag at toll plazas till March...

China may not fund USD 60 billion BRI project as Pakistan’s...