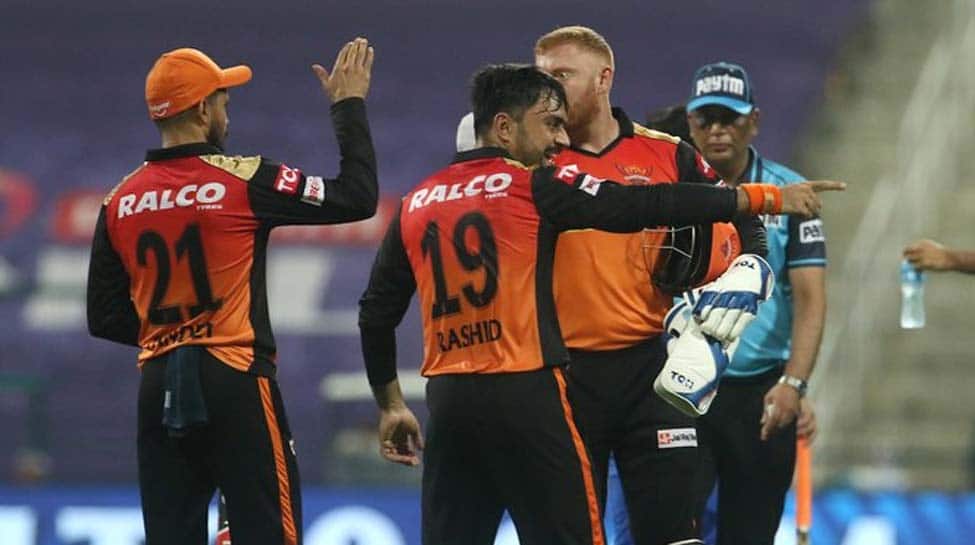 Jonny Bairstow smashed a half-century before the Sunrisers Hyderabad bowlers helped their side beat Delhi Capitals by 15 runs and register their first victory of the 2020 edition of the Indian Premier League (IPL) at the Sheikh Zayed Stadium in Abu Dhabi on Tuesday.

Opener Bairstow and skipper David Warner provided a perfect start to the Hyderabad-based franchise as the duo not only brought up crucial knocks of 53 and 45 runs, respectively, but also shared a 77-run partnership for the opening wicket.

While Warner was caught behind the stumps by Rishabh Pant off an Amit Mishra delivery, Bairstow departed after being caught by Anrich Nortje at mid-off on a Kagiso Rabada delivery in the 18th over.

Subsequently, Manish Pandey fell cheaply for three runs off Mishra’s delivery before Kane Williamson–who was named in Playing XI after missing the first two matches due to quadriceps injury–scored 26-ball 41 runs to help SRH post a score of 162 for four.

For Delhi Capitals, Kagiso Rabada and Mishra grabbed a wicket each.

In reply, Rashid Khan finished with brilliant figures of three for 14, while Bhuvneshwar Kumar claimed two wickets to help Sunrisers Hyderabad restrict the Iyer’s side to a score of 147 for seven in their stipulated 20 overs.

Besides the duo, Khaleel Ahmed and T Natarajan also chipped in with a wicket each.

Opener Shikhar Dhawan was the highest scorer for the Delhi Capitals with 31-ball 34 runs.

Rashid was adjudged ‘Man of the Match’ for his impressive show with the ball.

Gussa mat dilao: What Devoleena Bhattacharjee said after she and Rashami...

STOP THE BLEED training has saved lives from Sierra Leone to...

Kisan ka darza…: Amid protests, here’s what Sonu Sood has to...

India exercises its Right to Reply at UN in response to...

IPL 2020: Gautam Gambhir believes this player is the best young...

India vs Australia: Dream debut for Natarajan, sends back Labuschagne and...