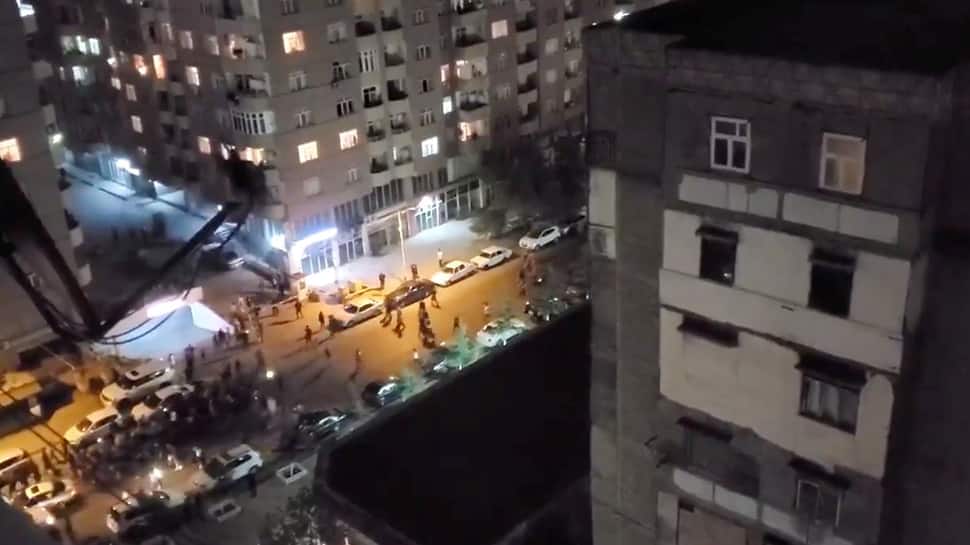 Iran`s president warned on Wednesday that fighting between Azeri and ethnic Armenian forces in the South Caucasus could spark a regional war and stepped up calls for a ceasefire.

With fighting showing no sign of easing on the 11th day of violence, the warring sides set out conflicting conditions for ending their deadliest clashes in more than 25 years and holding talks.

More than 360 people have been killed in the fighting in and around the mountain enclave of Nagorno-Karabakh, which under international law belongs to Azerbaijan but is populated and governed by ethnic Armenians.

Azerbaijan says Azeri cities outside the conflict zone have also been attacked, taking fighting closer to territory from which pipelines carry Azeri gas and oil to Europe.

British oil company BP said it had reinforced security at its facilities in Azerbaijan.

BP said it was working closely “with the relevant authorities in an effort to take necessary measures to provide the protection of our personnel, operations and assets”.

Iran, which borders both Armenia and Azerbaijan, has been talking to both the former Soviet republics as concern mounts that Turkey, a close ally of Azerbaijan, and Russia, which has a defence pact with Armenia, could be sucked into the conflict.

“We must be attentive that the war between Armenia and Azerbaijan does not become a regional war,” Iranian President Hassan Rouhani said in televised remarks.

Moscow`s foreign intelligence chief has said the conflict is attracting what he called mercenaries and terrorists, and that Nagorno-Karabakh could become a launch pad for Islamist militants to enter Russia and other states.

Russian President Vladimir Putin said Moscow was deeply concerned by the unfolding “tragedy” and held separate phone calls with the Armenian and Azeri leaders, whose countries fought a 1991-94 war over Nagorno-Karabakh.

Azeri President Ilham Aliyev said his country would hold talks with Armenia only after the acute phase of military conflict ends, and called for close ally Turkey to have a role in mediation, Russian news agency TASS said.

Aliyev has also said previously that Armenia must set a timetable for a withdrawal from Nagorno-Karabakh and surrounding Azeri territories for military action to end.

Armenian Prime Minister Nikol Pashinyan, who also spoke to Putin, reiterated accusations – denied by Ankara – that Turkey is intervening militarily on behalf of Azerbaijan and has sent mercenaries to the region.

Armenia’s ceasefire conditions are Turkey “discontinuing its engagement” and “the withdrawal of mercenaries and terrorists or their elimination”, Pashinyan`s press service quoted him as telling Time magazine.

He also said the military actions of Turkey and Azerbaijan in the conflict amounted to a “terroristic attack”.

“To me there is no doubt that this is a policy of continuing the Armenian genocide and a policy of reinstating the Turkish empire,” Pashinyan told Sky News.

Some 1.5 million Armenians were killed under Ottoman rule between 1915 and 1923. Turkey accepts that many Armenians living in the empire were killed in clashes with Ottoman forces during World War One, but contests the figures and denies the killings were systematically orchestrated and constitute a genocide.

Nagorno-Karabakh, which broke away from Azerbaijan`s` control as the Soviet Union collapsed, said on Wednesday its military death toll since Sept. 27 had risen to 320. It says 19 civilians have been killed and many wounded.

The Azeri prosecutor`s office has said 28 Azeri civilians have been killed, but Azerbaijan has not disclosed information about its military casualties.