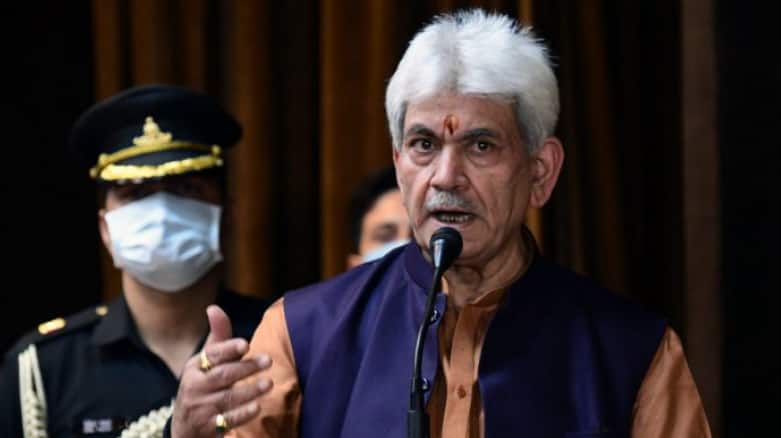 Srinagar (Jammu and Kashmir): Lieutenant Governor Manoj Sinha met Jammu and Kashmir NEET topper Basit Bilal Khan at the Raj Bhavan here on Tuesday. The Lt Governor congratulated the topper for his extraordinary feat and commended him for setting an example for all the youngsters.

“I wish him many more laurels in the future. He represents our future and his hard work and perseverance are going to inspire many to achieve their goals,” he said.

According to a press statement from the Raj Bhavan, applauding the efforts of young NEET qualifiers from across the Union Territory, the Lt Governor remarked that he is aware of the inherent strengths of people of the region and the government is committed to providing the requisite environment for their progress.

“Our youngsters deserve every opportunity to achieve their dreams, and it is our duty to provide the resources and support they need to succeed,” he said.

“These achievements go a long way to make positive changes in society and all these young achievers will be the key drivers of socio-economic growth and community development in the region,” the Lt Governor said.

An official press statement said, “The 18-year-old Basit who hails from Narwa area of Pulwama was accompanied by his father Sh Bilal Ahmad Khan and Chief Education Officer, Pulwama, Ms Soni Sonam. He has scored 695 marks out of 720, securing 99.98 percentile in the NEET-2020 exams, the result of which was declared recently.”

The Lt Governor extended congratulations to all the qualifiers and wished them success in their future endeavours.

Are climate scientists being too cautious when linking extreme weather to...

Aditya Narayan and Shweta Agarwal host a roka ceremony ahead of...

Unlock 5.0: Maharashtra to reopen cinema halls and swimming pools from...

Prohibitory orders in Mumbai extended till September 30 amid rising COVID-19...