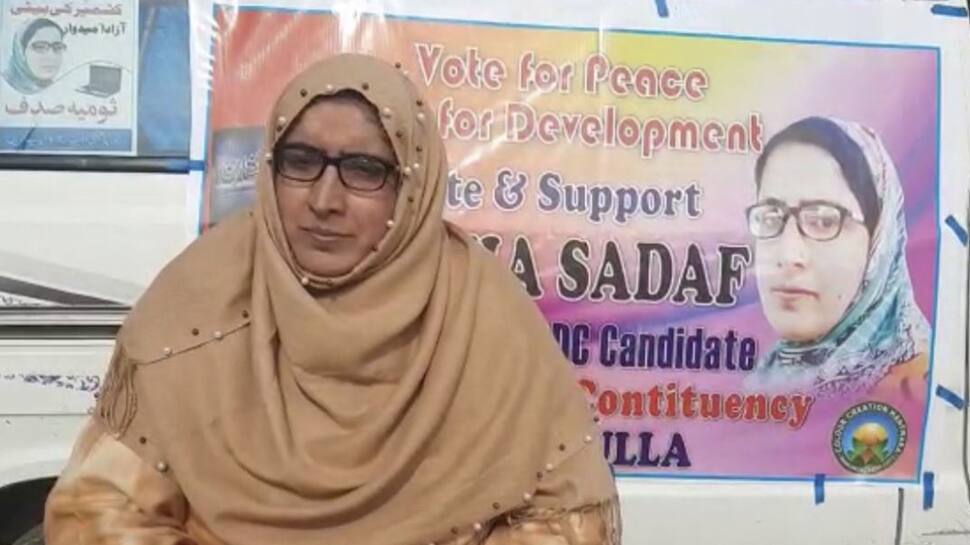 Sumiya Sadaf, a resident of Muzafarabad Pakistan occupied Kashmir said that she arrived in Kashmir ten years ago, after marrying a local militant from Batargam Kupwara village who had crossed the Line of Control (LoC) for arms training and returned back home under rehabilitation policy of government.

Sumiya Sadaf Candidate DDC said, “I came in 2010 after governments rehabilitation policy. Since than I am here. We came on the message of peace and we want peace in the country. Development is important and I want to work on it.”

Sadaf is not first woman from PaK who has jumped into fray. In 2018, two women from Pakistan administered Kashmir, Arifa and Dilshada married to former militants had won panchayat posts in Northern Kashmir’s Kupwara district.

The election symbol of Sadaf is ‘Laptop’. There are 12 candidates in fray while Sadaf in the only woman contesting from the said Block.

Sumiya Sadaf Candidate DDC added, “It is difficult for the government to provide jobs to everyone. “If I win, I would persuade and motivate people to become self-employed. Everyone has the ability to be an entrepreneur and here we can focus on this subject and people, particularly women can start their own ventures.”

Sadaf said that she wishes there should be peace and prosperity in both parts of Kashmir. The Kashmir in Pakistan is my birth place and Indian Kashmir is the place of my husband. I love both parts and wish peace and development either side.

Elastic-free face masks can help some with allergies stay safe during...

See you all at next climate strike: Teen environment activist Greta...

Ayodhya mosque to be solar-powered; 2000 people to be able to...