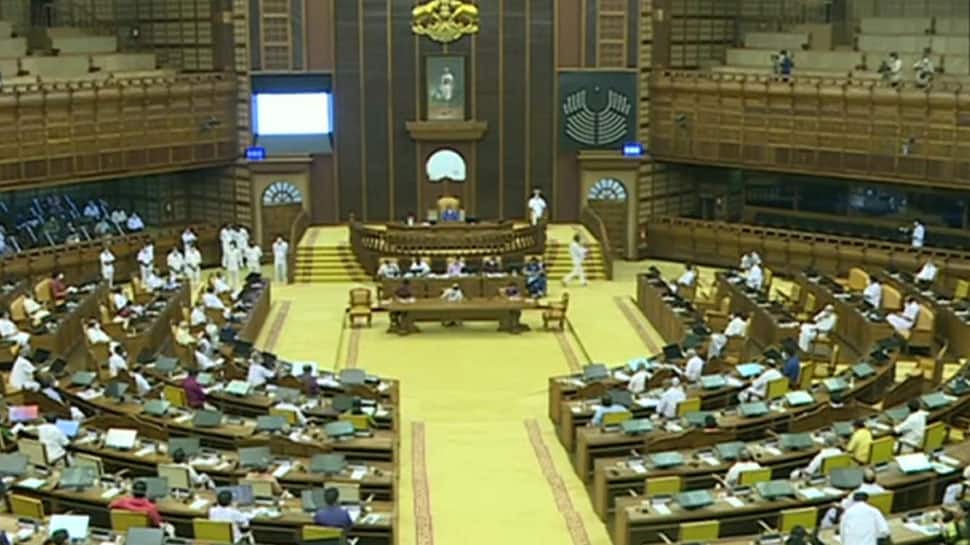 Thiruvananthapuram: Kerala government led by Chief Minister Pinarayi Vijayan on Thursday moved a resolution against the Centre`s three farm laws in the special session of the state assembly.

“The capital is witnessing the legendary struggle of the farmers. There is a great will behind this protest that has not been seen until recently. The Farmers (Empowerment and Protection) Agreement on Price Assurance and Farm Services Act 2020, The Farmers` Produce Trade and Commerce (Promotion and Facilitation) Act 2020, The Essential Commodities (Amendment), which were introduced and passed by the Central Government in Parliament. Farmers are protesting to scrap all the three laws,” he added.

The current situation makes it clear that if this agitation continues, it will seriously affect Kerala. There is no doubt that Kerala will starve if the supply of food items from other states stops: State Chief Minister Pinarayi Vijayan#FarmLaws https://t.co/hZKwowdmsV pic.twitter.com/4I8KkqnON9

Amid all this, more farmers are joining the struggle and fighting the extreme cold in Delhi. Thirty-two farmers lost their lives during the 35-day strike, the Chief Minister claimed.

“Legislatures have an obligation to take legislation seriously when it causes great concern and suspicion among the people affected. According to the latest official report of the Central Government, 43.3 per cent of the country`s workforce is employed in agriculture. For our country, agriculture is not just a productive sector, it is a part of our culture,” he added.

Therefore, the agrarian reforms need to be carefully conceived and implemented. Kerala has vast experience in this regard. Kerala is a state that has successfully implemented the Land Reforms Act, said Vijayan.

In addition, Kerala has made excellent interventions in resolving agricultural crises with the participation of local bodies and co-operative terminations.

After the Green Revolution in the country in the 1960s, a system was set up to provide food grain farmers with a minimum price for their produce, he added. “However, support prices are only available for a few products. In many parts of the country, falling prices of agricultural products and farmer suicides have become major social problems,” said Vijayan.

In this situation, the government should announce minimum support prices for more products and take steps to make agriculture profitable, he added. “Farmers are worried that they will lose even the current support price for food grains. The serious problem that arises is that the bargaining power of farmers is often weakened in the face of the strength of corporate entities,” said Vijayan.

Not only does the law not provide for legal protection for farmers, but it also lacks the capacity to wage legal battles with corporates. There should be a system in place where agricultural products are procured by the Central government and distributed to the needy at fair prices.

Instead, the Central government has allowed corporates to take over the trade in agricultural products. The central government is shirking its responsibility to provide fair prices to farmers, he added.

The Chief Minister continued by saying, there is a distrust among farmers about the fair price of agricultural produce. At the same time, food security is an important issue. When the government withdraws from stockpiling and distribution, hoarding and the black market will increase and food supply and hence food security will be jeopardised.

“The situation will be aggravated by the exclusion of essential commodities including food grains and pulses from the provisions of the Essential Commodities Act,” said Vijayan. The urgency of the current situation makes it clear that if this agitation continues, it will seriously affect Kerala. There is no doubt that Kerala will starve if the supply of food items from other states to Kerala, a consumer state, stops, he added.

“Especially at this stage of the Covid, Kerala could not bear the impact of such a situation. Agriculture is included in the State List. It is a serious problem that these important laws were passed in a hurry without even being sent to the Standing Committee of Parliament for consideration,” said Vijayan.

“In view of the above facts, it is reasonable for the farmers the backbone of the country to protest. The Kerala Assembly is urging the central government to scrap all the three laws,” he added.