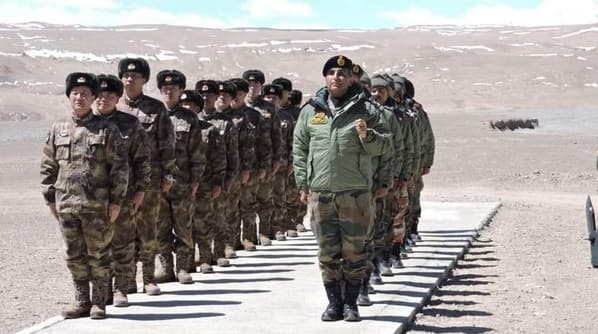 New Delhi: It appears the Chinese soldiers are not being able to withstand the harsh winters of the eastern Ladakh sector as they are being rotated on a daily basis at the forward positions, whereas Indian troops are staying for longer periods at the same locations.

“Our troops deployed at the forward posts along the Line of Actual Control are staying for longer periods at their positions than the Chinese. The harsh winters and the lack of exposure to such temperatures are forcing the Chinese to rotate their troops on a daily basis,” a government source told ANI.

The Indian side has an edge over their Chinese counterparts in terms of battling the weather as a large number of them have already done duty in the Ladakh sector, including the Siachen glacier or other high altitude positions, sources said.

Sources said the winter effect could be seen mostly at the strategic heights where the Chinese have deployed their troops close to the Indian positions. While the Indian soldiers stay there, the Chinese can be seen rotating troops from there every day, they added.

China acted aggressively in April-May and pushed almost 60,000 troops towards the Indian border in the eastern Ladakh sector, along with tanks and other heavy weaponry to transgress into the Indian territory and occupy positions here.

The Indian side responded and deployed almost an equal number of troops to prevent the Chinese from any further misadventure.

Meanwhile, the Chinese and the Indian side have been interacting with each other and have held eight rounds of talks at the corps commander level. The two sides had clashed heavily on June 15, resulting in the deaths of 20 Indian soldiers, and Chinese troops as well.

India wants the Chinese Army to withdraw from positions like the Finger area before the disengagement at the Southern bank of Pangong lake.

From 5-star to food stall: How this man turned crisis into...

I see them struggling: Shoaib Akhtar explains why India might find...

Kids with white-coat hypertension might be at risk for eventual progression...

PM Narendra Modi to talk to street vendors as part of...