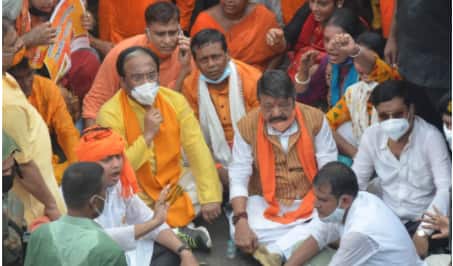 New Delhi: Union Law Minister Ravi Shankar Prasad on Thursday (October 8) alleged that the West Bengal government was creating an atmosphere of fear and muzzling opposition voice. Prasad strongly condemned the “barbaric treatment by the West Bengal police” of the BJP workers during today`s “March to Nabanna”, the state secretariat.

During a press conference in New Delhi, the Union Minister said, “We will bring about a change in Bengal. The BJP assures the people of Bengal that the party will continue to speak up for the citizens` democratic rights peacefully.”

Prasad said that BJP doesn`t believe in violence, but that peaceful protest is “our right”.

The Yuva Morcha of West Bengal BJP organised a massive rally in the twin cities of Kolkata and Howrah against the recent killings of its workers and leaders, the latest being the murder of Titagarh Councillor Manish Shukla. Shukla was gunned down in front of Titagarh police station in North 24 Parganas district.

Prasad said, “To protest these recent political killings in Bengal, around one lakh BJP members took out the march, Nabanna Cholo. But police used barbaric force with lathi-charge and water cannons to stop them, because of which 1,500 workers were injured.”

The march took a violent turn after the party workers allegedly hurled bombs and bricks at policemen. The police, in turn, resorted to using water cannons and fired tear gas shells, besides lathi charging the workers, to disperse the crowd.

Among the injured were many senior leaders like national secretary Arvind Menon, state vice-president Raju Banerjee who had to be hospitalised, north Kolkata president Shivaji Sinha Roy who was hit on the head and youth wing president Tejasvi Surya who was manhandled, said the law minister.

He said, “There were many women who were misbehaved with. I was told that the water sprayed on the BJP march was laced with chemicals because many started vomiting.”

“We want to humbly tell (Chief Minister) Mamataji (Banerjee) and the West Bengal government that if you think that you can stop the BJP by baton and barbaric police force, you won`t be successful. The BJP strongly condemns this barbaric treatment by the Bengal police of senior leaders of the party,” he added.

Recalling last year`s Lok Sabha elections, he said the ruling Trinamool Congress (TMC) had tried this before, adding “But we won 18 seats in Bengal. The grassroots reality is telling us that the BJP will form the government whenever there are Assembly elections.”

Ravi Shankar Prasad also lashed out at chief minister Mamata Banerjee, whom he alleged was “losing political foothold” in the state.

Planning to quit, US says it will not pay what it...

Should you take alcohol after getting Sputnik V anti-COVID jab? Here’s...