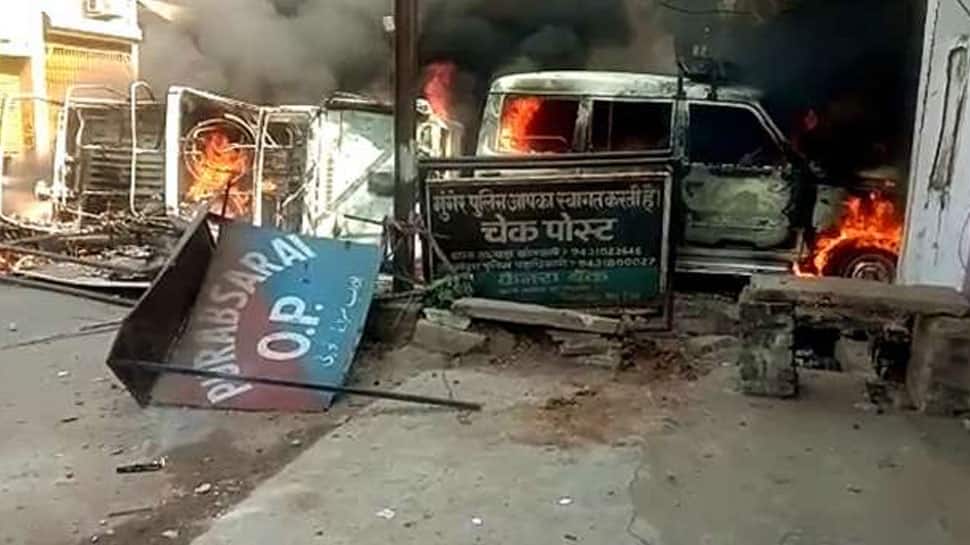 Patna: Amid political infighting over the recent Munger firing incident, an internal report by the Central Industrial Security Force (CISF), which has been accessed by Zee News, has stated that the local police fired first and when the situation went out of control, the CISF also fired later in the air.

The CISF has submitted its report on the October 26 violence in Bihar`s Munger to its headquarters in Delhi and the Election Commission. However, Jitendra Kumar, Additional Director General of Bihar Police, said that he has not received any report from the CISF yet. “We are doing the investigation with a team headed by Magadh range Divisional Commissioner and the report will be submitted to the Election Commission in seven days,” Kumar said.

The CISF report says that an altercation took place between the local police and the devotees over the slow pace of the Goddess Durga immersion procession.

“Subsequently, some of the locals pelted stones on the police party. In retaliation, local police fired in the air. As a result, devotees got angry and intensified the stone-pelting.

“In view of the tense situation, a team of the CISF comprising 20 personnel and other paramilitary forces was deployed there to restore peace. Since there was heavy stone pelting from the other side and the situation was out of control, M. Gangaiah, a CISF personnel, fired 13 rounds from an Insas rifle in the air to control the situation. After firing in the air, a mob dispersed from the Deen Dayal Upadhyay Chowk,” the report said.

On Friday, the Munger Police claimed that 100 bullets and two magazines were missing from the Purab Sarai police station. This police station was vandalised by agitators on Thursday who were not satisfied with the police action.

Local residents claimed that the Munger Police resorted to firing on Monday night around 11.45 PM, leaving one person dead and several others injured. Earlier, the Bihar Police had claimed that the firing was the work of some anti-social elements and not the police.

The Election Commission had directed the Bihar government to conduct a high-level inquiry into the violence. Asangba Chuba AO, the Divisional Commissioner, has been given the responsibility of the investigation.

Meanwhile, a team of Congress leaders met the Governor and demanded strict action in the case. “We have met the Governor of Bihar. During the half an hour meeting with him, he listened to our points and assured us that proper action will be taken.”

Shiv Sena leader Sanjay Raut said that the Munger incident was an attack on Hindutva. “If such an incident would have taken place in Maharashtra, West Bengal or Rajasthan, the Governor and the BJP leaders would have asked for President`s rule. As the incident has happened in Bihar which is ruled by the NDA, none of the leaders are talking about it,” he said.

Bank holiday October 2020: Here are the days banks will remain...

Ahoi Ashtami 2020: Date, timings, significance and why is it celebrated...

Want to bring home a Sedan this Diwali? Take a look...

AAP workers to observe fast on Dec 14 in support of...