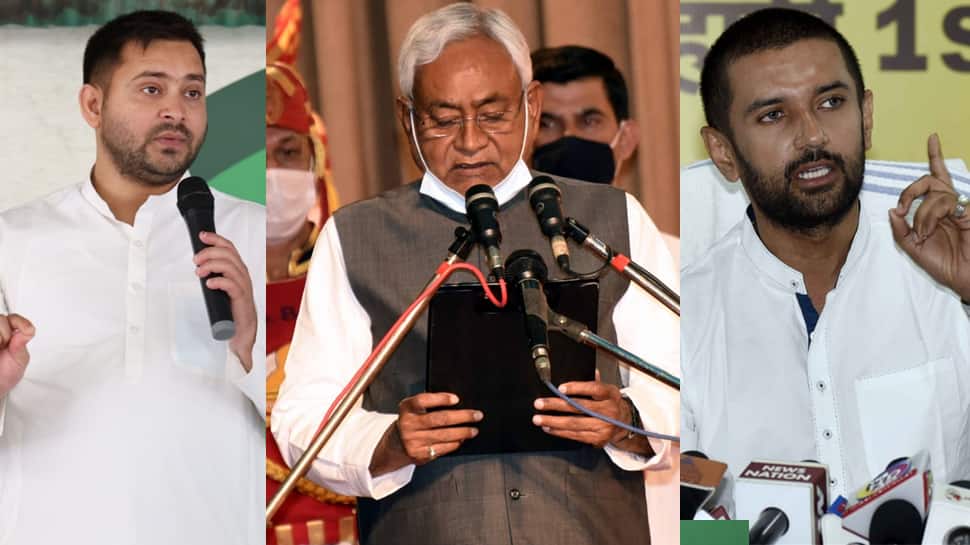 Nitish Kumar, who was sworn-in as Bihar chief minister for the seventh time on Monday was greeted with derision by opposition RJD and the LJP for assuming office though his party, the JD(U) has secured far less number of seats than its ally – the BJP. RJD leader Tejashwi Yadav mocked Kumar calling him a nominated chief minister, while LJP chief Chirag Paswan said tongue-in-cheek that he hoped that the JD(U) president would “continue to be NDA’s chief minister”.

Kumar, who heads JD(U), was administered the oath of office at the Raj Bhavan here by Governor Phagu Chauhan, a day after he staked a claim. Kumar, whose party the JD(U) had won a mere 43 seats out of the total 243 in the House, was armed with the unanimous support of all legislators of the NDA.

The RJD and its leader Tejashwi Yadav, who had led a spirited campaign, have been alleging that the counting process was compromised under pressure from Kumar, a charge refuted by the poll panel. Mocking Kumar, whose election to the post he questioned, Tejashwi said he has been nominated for the job.

Best wishes to Nitish Kumar ji on being nominated as the chief minister, he said in a tweet in Hindi. “I hope he makes his priority positive issues such as the aspirations of the people of Bihar, the NDAs promise of 19 lakh job-employment, education, health, livelihood, irrigation and justice rather than his ambition for the chair,” he added.

Congratulations to Nitish Kumar who has been nominated as the chief minister because of the circumstances, rather than being elected and then selected,” the RJD said in its tweet in Hindi. “Bihar has suffered hugely because of your socially- divisive and power-centric policies. This time the unemployed youth of Bihar, contract teachers and other workers will ask for their due every day, it added.

Five Mahagathbandhan constituents – the RJD, Congress, CPI(ML), CPI(M) and CPI boycotted Kumars swearing-in alleging that the mandate was against the ruling NDA but it was changed through a fraud. The RJD claimed Kumar owes his chief ministership to prevailing circumstances.

LJP president Chirag Paswan, a bitter critic of Kumar, congratulated Kumar saying tongue-in-cheek that he hopes the JD(U) leader will “continue to remain the NDA’s CM”. In an apparent swipe at Kumar, he said, “I congratulate you on becoming the chief minister and the BJP for making you one”.

Paswan, during the acrimony-filled campaign for Bihar assembly polls, had claimed that Kumar might ditch BJP after the results were out, join the RJD-led Grand Alliance and make yet another attempt at posing a challenge to the NDA in the 2024 general elections. Paswan, who had chosen to plough a lonely furrow, had said the LJP was and will remain loyal to BJP, which was staring at the spectre of yet another “paltimaar” (volte-face) by the JD(U) president.

In another tweet, the LJP chief termed the NDA’s victory in the state polls “a big win for Prime Minister Narendra Modi”. He took a swipe at Kumar saying “There are some people who have been in power for 15 years but still have to take help of three friends (allies)”. LJP had withdrawn from the NDA in Bihar.

RJD leader and Tejashwis elder brother Tej Pratap Yadav too took a dig on Kumar. Congratulations and best wishes to Nitish Kumar ji on being nominated as the Chief Minister for the seventh time. I hope that drunk rats don’t breach any dams this time and no bridge collapses before being inaugurated, he tweeted. His reference to drunk rats was to media reports in 2017 that said some seized liquor bottles kept at a police station in the dry state had been finished off by liquor- loving rodents. The then Water Resources Minister Rajiv Ranjan Singh had said that rats had damaged river embankments which caused devastating floods in the state.

Black and Asian patients have increased risk of severe COVID-19 at...