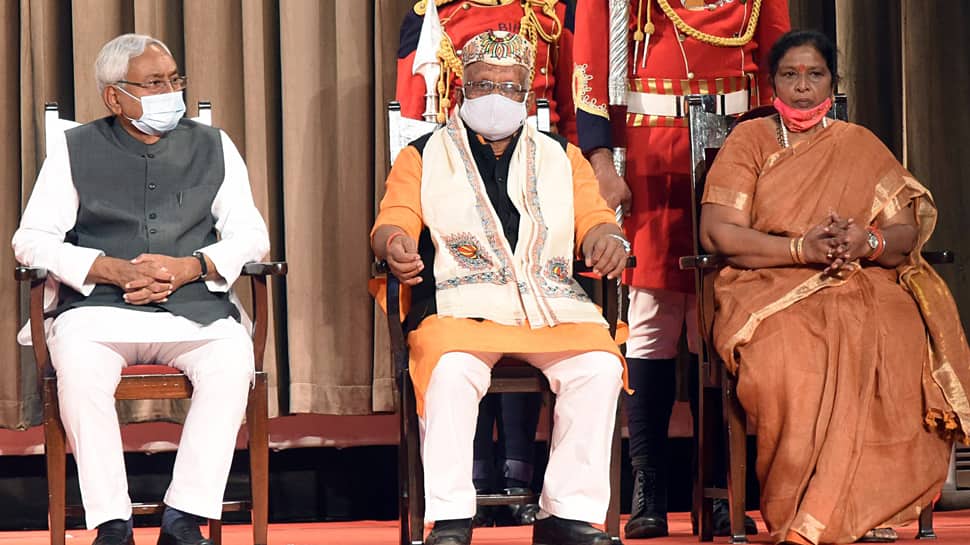 Nitish Kumar was back as Bihar chief minister for a record seventh time on Monday, heading a 14-strong council of ministers including two deputy chief ministers. Kumar was administered the oath of office by Governor Fagu Chauhan at a simple ceremony at Raj Bhavan which was attended, among others, by Union Home Minister Amit Shah and BJP national president J P Nadda, but boycotted by the opposition ‘Mahagathbandhan’, a grand alliance of five parties led by the RJD.

The swearing-in of the 69-year-old leader marked the start of a tenure when his JD(U) stands enfeebled by an electoral setback and the BJP has emerged way too stronger than its regional ally for the first time. The BJP has dropped as Deputy Chief Minister Sushil Kumar Modi, a veteran leader. While the fate of Modi, who is a member of the state legislative council, remains unclear, the party has handpicked two of its MLAs Tarkishore Prasad and Renu Devi for the Deputy CM’s post.

Kumar, on his part, sought to steer clear of the speculations around his former deputy and replied curtly when approached with queries by journalists, saying “This is the BJP’s decision. You should pose your questions to the BJP leadership”. “Congratulations to Nitish Kumar Ji on taking oath as Bihar’s CM. I also congratulate all those who took oath as Ministers in the Bihar Government. The NDA family will work together for the progress of Bihar. I assure all possible support from the Centre for the welfare of Bihar,” Prime Minister Narendra Modi tweeted.

READ | Winter session of Bihar assembly to begin from November 23

Tarkishore Prasad: Four-time MLA Tarkishore Prasad took oath on Monday. Prasad has been elected MLA for the fourth time from Katihar seat of ​​Bihar. He belongs to the Vaishya community. He started his political career with Akhil Vidyarthi Parishad and has also been associated with the Sangh. He is counted among the fiercest leaders of the party. Prasad has won the election for the fourth consecutive time by defeating Dr Ram Prakash Mahato of RJD by 12,000 votes.

Tarkishore Prasad has an old association with the Rashtriya Swayamsevak Sangh. His family is originally from the Talkhua village of Saharsa district. He belongs to the Kalwar Vaishya society, which has the status of backward class in Bihar. Tarkishore Prasad contested for the first time in the year 2005 and defeated Dr Ram Prakash Mahato by 165 votes in a very close contest. He then won the 2010 and then 2015 assembly elections by a considerable margin. This time he managed to win the election with a huge difference of ten thousand.

Earlier he had told news agency ANI, “There are indications that Renu ji (BJP leader Renu Devi) and I will take oath as Deputy Chief Ministers of Bihar today. This is a good step towards women empowerment. This is a huge responsibility, and the party has kept their belief in me. I’ll try to work upon it. Everything is good in NDA. We already had decided our Chief Minister. We are working for the development of Bihar.”

Renu Devi: Bettiah MLA Renu Devi took oath on Monday as deputy CM of Bihar. She belongs to the Nonia caste of the EBCs in Bihar. She too started her political journey with Durga Vahini, an organization associated with the RSS. She has been the president and national vice president of Bihar Pradesh Mahila Morcha and also a minister in the Bihar government. She has reached the Bihar Assembly after winning from the Bettiah seat in this election. The party has chosen her as the deputy leader of the Legislative Party this time.

Of the 14 ministers sworn in on Monday, seven are from BJP, five from JD(U) and one each from HAM and VIP. While four of them belong to the upper castes, the traditional support base of the BJP, three are Dalits and the remaining from the often disorganised but numerically powerful sections of the other backward classes (OBC) and extremely backward classes (EBC).

Besides Renu Devi, who belongs to the EBC group Nonia, Sheela Kumari Mandal, an OBC from the JD(U) is the other woman minister who made a successful electoral debut in the recently held polls. The other faces are Ashok Choudhary, who held a ministerial portfolio in the previous government and JD(U)’s state working president, Santosh Kumar Suman, whose father Jitan Ram Manjhi is a former chief minister and HAM president, and Ram Prit Paswan, a senior BJP leader from Madhubani in north Bihar.

From the Vikassheel Insaan Party, the inductee is its founding chief Mukesh Sahni who plunged into politics a couple of years ago after giving up a career as a set designer in Bollywood. Sahni’s party has won four seats though he made the cut despite having lost. The RJD-led ‘Mahagathbandhan’ boycotted the ceremony claiming the public mandate in the elections was against the NDA but it was altered by “fraud”.

The NDA won 125 seats in the 243-member assembly against 110 clinched by the opposition Grand Alliance to pave the way for a fourth successive term for Kumar in office but with diminished clout following a debilitating slide in the number of JD(U) lawmakers that came down to 43 from 71 in 2015.

The drastic fall in the number of JD(U) MLAs, as was expected, saw the BJP, which hitherto played a second fiddle to Kumar, drive a hard bargain and walk away with a larger share in the ministerial pie, and looks set to pocket the Speaker’s chair as well.

Charlie’s Life, a story of a pomeranian dog who loves people...

Analysis reveals heart-related side effects of hydroxychloroquine and chloroquine

Sputnik V Covid-19 vaccine made by Russia gets nod for clinical...

Why does Anand Mahindra think it’s time to move to Mars?...

Two women jump out of moving cab in Punjab’s Amritsar to...