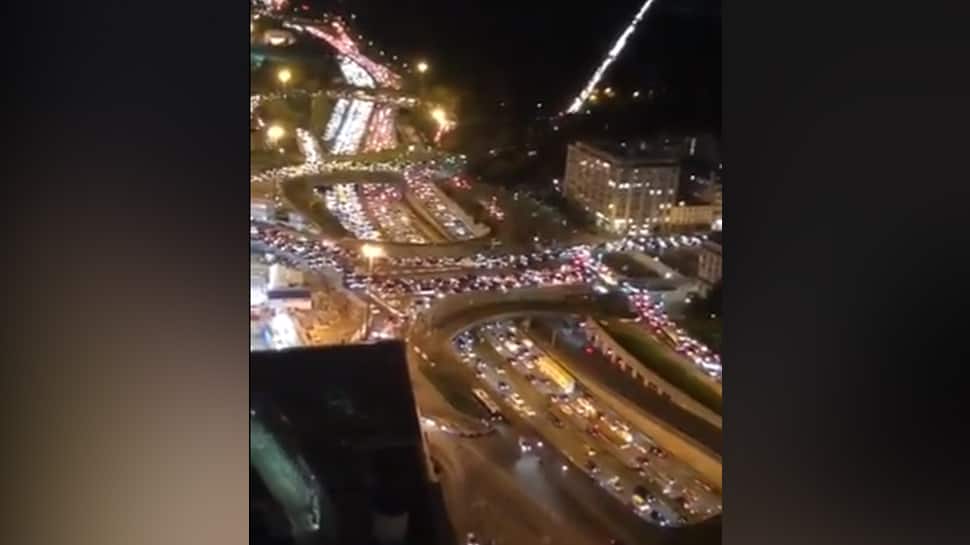 France has gone back into a nationwide lockdown in a bid to contain the COVID-19 pandemic that is again threatening to spiral out of control. Just ahead of slipping back into lockdown, the city of Paris witnessed traffic jams for hundreds of kilometres.

During the lockdown, Parisians, along with the rest of this nation of 67 million, were confined to their homes from Friday, for the second time in seven months. But on Thursday evening, in a jaw-dropping situation, the traffic jams stretched to some 700 kilometres (435 miles) in the region around Paris, as per news agency AP.

Many Parisians didn’t wait to be confined to their typically cramped apartments for four weeks. Freeways around the capital descended into scenes of traffic chaos during the night as residents fled the capital. People many headed for country or family homes with more space.

Many were also leaving for the important All Saints’ Day holiday this weekend. French President Emmanuel Macron said that authorities would be tolerant about families returning from the holidays on Monday, but otherwise, interregional travel is strictly prohibited. The situation was also quite similar in the cities of Lyon and Bordeaux, hours before the lockdown came into effect, as reported by RT webiste.

Earlier, French President Emmanuel Macron had said in an address to the nation that the new measures echo the eight-week lockdown that France enforced in the spring when hospitalisations and deaths caused by the COVID-19 pandemic reached a peak. But unlike the previous lockdown, most schools are to remain open, Macron had said.

Friday marked the start of a nationwide four-week government-imposed lockdown in France to fight a resurgent coronavirus threatening to swamp the country’s health system.

Citizens have been ordered to stay at home at all times with no visitors, or risk steep fines or prosecution. They are allowed out for one hour of exercise a day, or for medical appointments or to shop for essential goods. On Friday in the popular 10th arrondissement neighbourhood, sidewalks were generally empty, with just a few passersby hurrying past and clutching lockdown exception forms, well-known since the country’s first lockdown and known simply by their French name, ‘attestation’.

Restaurants and cafes were shuttered, apart from those that offered takeout, such as the brightly-lit McDonald’s near the Stalingrad metro station. The only places that were busy were supermarkets as residents stockpiled essential food and goods.

Careful! Bursting or selling of firecrackers may attract Rs 1 lakh...

FSU researchers track nutrient transport in the Gulf of Mexico

Hazrat Nizamuddin Dargah in Delhi to reopen from September 6 |...