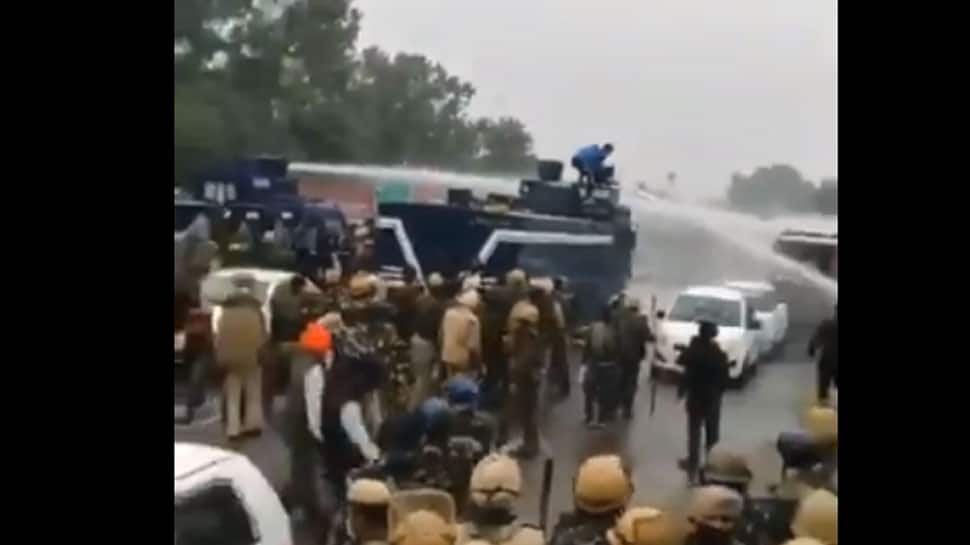 NEW DELHI: Even as thousands of farmers braved water cannons and tear gas while protesting against Centre’s controversial farm bills, an educated youth from Punjab’s Ambala stole the limelight by helping the farmers continue their stir by defying the police and security personnel deployed on government duty.

According to media reports, Navdeep Singh – a young protester and a farmer – jumped on top of the water cannon-mounted vehicle ‘Varun’ and turned the tap off, helping several protesting farmers who were being targeted by it. A video of the incident has now gone viral on social media.

The videos show Navdeep braving police lathis to climb and turn off the water cannon tap and jumping back onto a tractor-trolley during the farmers’ protest.

This incident is said to have taken place near Kurukshetra in Haryana. Navdeep is a graduate and was protesting along with farmers from over 250 villages.

Farmers from Punjab faced water cannons and broke police barriers at the state’s border with Haryana as they pushed towards the national capital Thursday on their ‘Delhi Chalo’ march against the Centre’s farm laws.

By late evening, a large number of protesters from Punjab and Haryana were close to Delhi, where too police were deployed in strength at border points. There were traffic snarls during the day at Delhi’s border with police checking vehicles coming in from Haryana and Uttar Pradesh. Metro services were restricted.

At the Punjab-Haryana Shambhu border, police and Punjab farmers in their tractor-trolleys were locked in a confrontation for a couple of hours in the morning.

Police made announcements on loudspeakers asking the farmers assembled on the Punjab side to disperse. But as protesters tried to push through barricades, the Haryana Police used a water cannon and lobbed teargas shells. Farmers chucked some steel barricades into the Ghaggar river from the bridge where they had been stopped.

Apart from this confrontation in Ambala district, there were face-offs between the protesters and police in Haryana’s Sirsa, Kurukshetra, Fatehabad and Jind districts bordering Congress-run Punjab.

Police had placed cement and steel barricades and parked trucks on the road to stop the farmers’ tractor-trolleys, some of them laden with food for the planned two-day protest, which many felt could extend further.

But a few hours later, at most border-points, the farmers were let through. At Shambhu, a few protesters initially managed to cross the barricades on foot. Later, police eased the blockade, allowing the tractors to proceed on the road to Delhi, 200 km away.

But barricades were also set up at other points on this Amritsar-Delhi highway that passes through BJP-run Haryana. Police used water cannons also against protesters trying to enter Kaithal district, and at Khanauri border where farmers were protesting under the banner of Bhartiya Kisan Union (Ekta-Ugarhan).

Amarinder Singh and his Haryana counterpart exchanged words over Twitter. The Congress veteran asked Manohar Lal Khattar why his government was stopping farmers, and the BJP leader told him to stop inciting them.

Ahead of the protest, Haryana had announced sealing its borders with Punjab to prevent farmers from entering the state on their way to Delhi. The Delhi Police had also made clear that they had denied permission to the farmer organisations planning to protest in the capital on November 26 and 27.

41 trains cancelled, 11 short terminated due to farmers’ protest in...

World Hearing Day 2021: Know why aural faculty care should be...