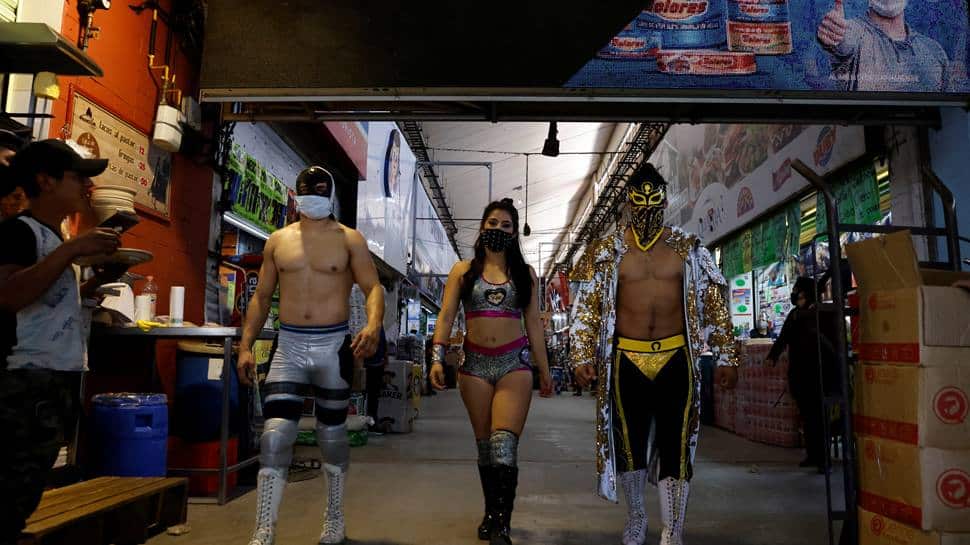 One year into the pandemic, arenas that would usually draw thousands of rowdy spectators to watch the free-style wrestlers in lucha libre fights have stayed closed.

So the masked wrestlers have taken on a different fight.

“Put on a mask!” a group of wrestlers in traditional outfits urged buyers and sellers in the bustling thoroughfares of Mexico City`s sprawling Central de Abasto market. “Be responsible!”

Those who resisted were sprayed down with disinfectant.

Every day, the market stretching across an area equivalent to about 327 soccer pitches attracts about half a million people, making it a hot spot for infections.

Mexico’s official death toll from COVID-19 is nearing 200,000, the third-highest in the world.

While many Mexicans do wear masks, markets have been one of the biggest challenges for officials trying to keep food supplies open while containing the spread of the virus.

“We must keep fighting,” said a wrestler dressed in blue, who performs under the name Ciclon Ramirez Junior.

“The campaign is so people know they can’t stop fighting (against the virus), that they need to keep wearing masks and using gel. This fight isn`t over, we`ve got to give it more.”

A youth office in the Mexico City government this month began to deploy wrestlers in various markets in the capital to raise awareness of the pandemic while also promoting the culture heritage of lucha libre is one of Mexico`s most popular sports.

A major tourist draw, the masked fighters of lucha libre have long captured the imagination of spectators with their mysterious identities and off-the-wall performances.

We are not part of Gupkar alliance, says J&K Pradesh Congress...