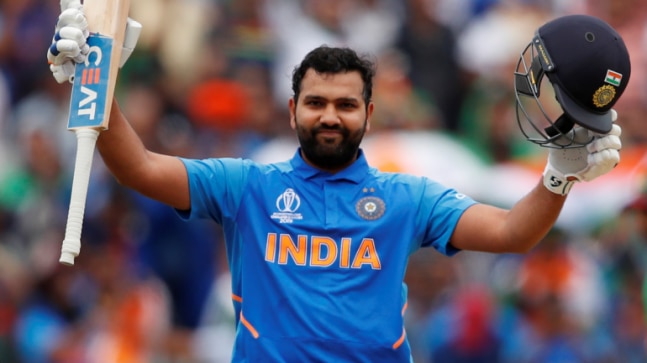 Despite being one of the top contenders of the ICC title, India made their exit from the 2019 World Cup, held in England, after their semifinal loss to England. India vice-captain and opener Rohit Sharma had a rare bad day as he managed to score only 1 run. However, Sharma ended up as the highest run-getter in the ICC tournament with 648 runs in 9 matches, with Australia’s David Warner accumulating 647 runs and being on second. Had India played the final, Rohit Sharma would’ve most likely won the Player of the Tournament award. The Indian limited-overs vice-captain, however, went on to have a great year with the bat as he amassed 1490 runs averaging 57.30 in ODIs in the calendar year of 2019.

The BCCI had, hence, recommended Rohit Sharma’s name for the highest sports honour in India – the Rajiv Khel Ratna award. After having won the award, Sharma has joined an elite list of Indian cricketers who have won the sporting honour in the past. While batting legend Sachin Tendulkar was bestowed with the honour back in 1997, former Indian captain MS Dhoni has bagged the award in 2007. India captain Virat Kohli had won the award in the year 2018 and Sharma has joined the elite group this year.

‘Wonderful group to be part of’

“It feels great to be receiving the highest sporting honour. I am so happy and privileged to receive this award. I would like to thank the Sports Ministry and the BCCI for acknowledging and recommending my name. I promise to keep working hard and bring more laurels to my country,” Rohit Sharma said in a video released by BCCI’s official Twitter handle on Thursday.

I am very happy and feel privileged to receive this honour. I promise to keep working hard. Fans are my support system & I am sure they will keep backing us: @ImRo45 on his Rajiv Gandhi Khel Ratna Award, India’s highest sporting honour. pic.twitter.com/30d6vb6WMz

“It’s a wonderful group to be part of (Sachin Tendulkar, MS Dhoni and Virat Kohli). All these names mentioned, they have done wonders and brought so much joy to our country. To be joining the list, it’s a great honour. I am very happy.

“To be recognised anything to do you for the country is a big motivating factor. I will always try to bring happiness and joy for our country. To the fans, my support system, and to my family, thank you very much, keep supporting me,” he added.

Cabinet approves assistance of about Rs 3,500 crore for sugarcane farmers...

Sky islands and tropical alpine sunflowers at risk of disappearing