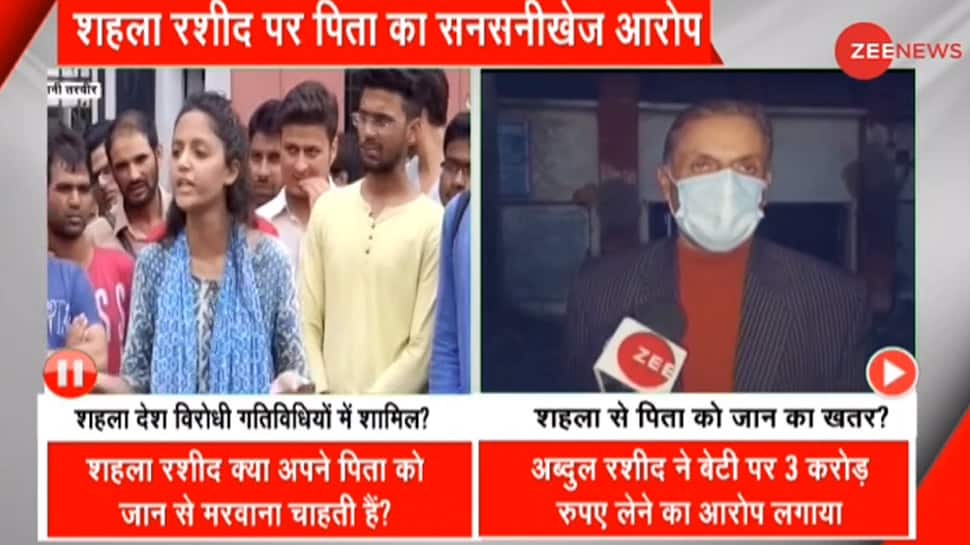 In less than 48 hours after the father of former Jawaharlal Nehru University (JNU) student, Shehla Rashid, exposed her ‘anti-national activities’, Shehla on Wednesday called him a ‘parasite’ adding that he exploited her mother ‘financially, abusing her physically and verbally’.

Taking to micro-blogging site Twitter, she lambasted his move of exposing her ‘notorious activities’ as a ‘political stunt’. On December 1, Shehla’s father Abdul Rashid Shora alleged that he has been facing death threat from his daughter. In a letter written to Jammu and Kashmir DGP, Abdul had claimed that Shehla took Rs three crore in cash to join Kashmir centric politics from ‘notorious people’. He has asked for an investigation of her bank accounts.

My sister & I have been brought up by a single parent, as my father has never been there for us, emotionally or financially.

He never even knew which class we are studying in – clear from his letter which says that “Shehla was in last semester of Ph.D. of Sociology in 2017.”

On Wednesday she tweeted, “My sister & I have been brought up by a single parent, as my father has never been there for us, emotionally or financially. He never even knew which class we are studying in – clear from his letter which says that “Shehla was in last semester of Ph.D. of Sociology in 2017.”

She added, “Even a cursory Google search would have given him more information about what stage of study I’m in! He says that I run 3 NGOs. This shows how involved in my life he is! Anyone who follows me even remotely knows that I’m not associated with any NGO.

Shehla also said, “But he clearly refused to see me. After this incident, my sister stopped talking to him completely. Truth is, he has just been a parasite, exploiting my mother financially, abusing her physically and verbally. My mother has served the govt for 32 years and brought us up with her”

“Halal income, with her blood, sweat and tears. She is our mother & father. She’s been there for us despite everything, loved us unconditionally and been extremely protective towards us. She even put up with abuse for so long, simply so that we have a father for appearance’s sake!” she added.

She wrote, “This political stunt by him is a brazen attempt by him to pressure us into withdrawing the case of Domestic Violence in which we are not merely applicants, but also witnesses. In fact, these tactics amount to witness intimidation.”

In a letter on December 1, he wrote, “I, Abdul Rashid Shora father of Shehla Rasheed Shora ex-JNU Student Leader and General Secretary Jammu Kashmir People’s Movement respectfully submit that I am under a constant threat of life by my daughter Shehla Rashid Shora who is supported by the elder daughter namely Asma Rashid and my wife namely Zubaida Shora well as her security guard namely Sakib Ahmad.”

He added, “This threat perception started in 2017 when Shehla Rasheed jumped all of a sudden into Kashmir Politics, first when she joined National Conference Party and then Jammu Kashmir People’s Movement Party. For me, it was a sudden shock when she had categorically refused in front of me not to take part in JK Politics and at that point of time she was in CPI-M.”

Abdul Rashid Shora also said, “Just two months before the arrest of Zahoor Vatali in Terror Funding Case under UAPA I was called by Zahoor Vatali and Rasheed Engineer (Ex-MLA) at Vatali’s Residence at Sanat Nagar, Srinagar in June 2017 for a sitting and she was in the last semester of her PhD in Sociology after we met they revealed in front of me the trailer of the launch of JKPM party and urged me to extend cooperation to merge Shehla Rashid into their game plan, at that point of time Shah Faesal was in the USA on education leave under the patronage of Feroze Peerzada presently President of JKPPA party and Zahoor Vatali.”

“They offered me during the meeting Rs 3.00 crore for Shehla to join these notorious people. As I felt that the money is coming from illegal channels and shall be used for unlawful activities, I did not take the money and later asked my daughter to not indulge in any such transactions with these people,” he wrote in the letter.

“Despite my resistance I found my wife Zubaida Shora and elder daughter Asma Rashid to be supportive of Shehla and becoming a party to this deal along with one more boy Sakib Ahmad who is a downtown boy who was introduced to me as her personal security man by Shehla as he used to carry a pistol with him,” he added.

“After a week when Shehla came to Srinagar from Delhi, she confirmed to me that she has got transferred the referred amount at Delhi in cash and there is no need for me to disclose anything regarding this transaction and my meeting with Rasheed Engineer and Zahoor Vatali with anybody, as this can put my life in danger,” he stated.

“She also told me that she has accepted the money and much more is about to come in future and so I need to shut up my mouth. Since as a concerned father I strongly objected to my daughter’s decision for joining these notorious people as I felt the money coming will be used for unlawful activities,” he further wrote in the letter.

“I have a strong belief that there are anti-national activities going on in my house, the characters involved in this plan are my daughters, my wife and Shehla’s security man namely Sakib Ahmad (a downtown locality body who carries a pistol with him and is associated with Shellla since 2017), who later threatened me with his pistol for my resistance posted to Shehia for her activities,” he added.

Abdul Rashid Shora, “For the continuous resistance that I was posed to Shehla, Sakib and other suspicious persons who frequented my house I was continuously threatened to leave the house. For my strict stand against these such activities, Shehla and her mother hatched a conspiracy to throw me out at the house by filing a complaint under the provisions of Protection of Women from Domestic Violence Act in the Court of 3rd Additional Munsiff, Srinagar wherein the said court restrained me from staying in my home.”

He added, “Despite getting a legal remedy from the Court of 2nd Additional Sessions Judge, Srinagar who as per his order allowed me to stay at my residence with some conditions but despite that local police failed to implement the court order and restore me in my home. Since local police did not accompany me to my residence as per court order I went home myself alone alongwith court order, wherein I was threatened for life by Sakib and his armed associates at my residence and fearing threat to my life I have run away from Srinagar to Jammu.”

Abdul Rashid Shora wrote, “It is humbly requested to your good self to ensure my personal security and kindly direct your concerned Police Station to extend their support to me in getting back to my house as per court order. I also request your good self to order investigations into the conduct of Sakib and his associates, bank details of Shehla Rashid, Asma Rashid, Zubaida and Sakib, property acquired by them at New Delhi, their e-mail accounts and their mysterious financial dealings with Feroz Peerzada, Zahoor Vatali and Rashid Engineer and notorious activities being done by them in the name of Empowerment of Women and Social Justice NGO.”