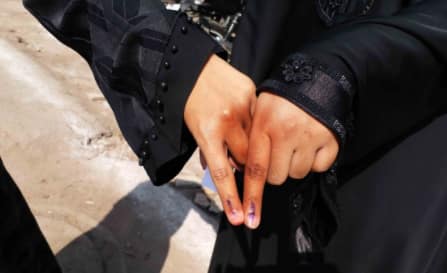 New Delhi: In Greater Hyderabad Municipal Corporation (GHMC) election on Tuesday (December 1) witnessed a low turnout as merely 35 percent of the 74 lakh-odd voters turned up to cast their votes. Polling, however, passed off peacefully, but repoll was ordered in ward number 26 owing to a symbol mix-up involving the two Left parties– CPI and CPI (M), according to reports.

Ballot papers were used in total 150 wards of the corporation. The polling began at 7 AM and concluded at 6 PM and went off peacefully without any major incident. The voter turnout was 35.80 per cent till 5 PM and the final poll percentage would be released after compilation and as per the procedures, official sources told PTI.

The Telangana State Election Commission (SEC) ordered repolling in all 69 polling stations of Ward number 26 after it was found that the symbol of CPI(M) was printed in the ballot paper instead of CPI, an official release said, adding that the repoll would be held on December 3.

As many as 74.44 lakh voters were supposed to exercise their franchise while 1,122 candidates were in the fray in a battle between the ruling TRS and the opposition BJP and Congress.

Criticising the ruling TRS over the low turnout, BJP leader and Union MoS (Home) G Kishan Reddy said it should “hang its head in shame,” alleging that the TRS used the SEC for its “selfish politics” and indulged in misuse of power.

Meanwhile, special arrangements were made in view of the COVID-19 pandemic and the SEC enabled the virus-infected persons to either vote at polling stations physically or use postal ballot. If the COVID-19 patients have not used postal ballots, the poll panel allowed them to cast their vote in the final hour — from 5 PM to 6 PM, wearing mask, face shield and gloves.

Superstar Chiranjeevi and popular actor Nagarjuna were among the leading Telugu film personalities who cast their votes in the GHMC elections. Chiranjeevi, a former Union Minister, and his wife Surekha exercised their franchise at a polling booth in Jubliee Hills.

Nagarjuna and his wife Amla cast their votes at a polling station at Women Cooperative Society in Jubliee Hills.

Popular young actor Vijay Devarkonda, Bellamonda Sai Sreenivas also cast their votes in Jubliee Hills. Devarkonda appealed to people to come out and cast vote as authorities have taken all precautions in view of COVID-19 pandemic.

Actress Manchu Lakshmi arrived at a polling station, wearing a special T-shirt to convey the message to voters to exercise their right to vote.

Table tennis player Naina Jaiswal cast her vote, appealing everyone to take part in the elections and cast their votes.

Chief Secretary Somesh Kumar cast his vote in Rajendranagar division. He along with his family members exercised the right at Upperpalli.

State Election Commissioner C Parthasarthi cast his vote at a booth in Banjara Hills and said the polling was progressing peacefully and smoothly in all 150 divisions of GHMC.

BJP leader P Muralidhar Rao cast his vote in Bagh Amberpet division. He urged all to come out and cat votes to make democracy successful and transform Hyderabad into a world-class city.

Greater Hyderabad Bonthu Rammohan and Deputy Mayor Baba Fasiuddin exercised their franchise. Rammohan along with his wife Bonthu Sridevi cast their votes in Cherlapally division. Sridevi is the TRS candidate from the division.

Rama Rao, who led the ruling party in the campaign and his wife exercised their franchise at Nandinagar polling station in Banjara Hills.

Rama Rao, who is son of Chief Minister K Chandrasekhar Rao, urged voters to participate in voting. “Think before voting what kind of public representatives you want for the development of Hyderabad,” he said.

Kishan Reddy and his wife cast their votes at a polling booth in Kachiguda. The union minister appealed to all voters to exercise their right to franchise.

Majlis-e-Ittehadul Muslimeen (MIM) president and Hyderabad MP Asaduddin Owaisi, who cast his vote at Shastrippuram in the old city, told reporters, “I exercised my right to vote. I am appealing to voters to come out and use their voting right for the development of the city, especially old city and for protecting the city`s composite culture, heritage and language.”

There are 150 wards in the Greater Hyderabad Municipal Corporation, where the Mayor`s post is reserved for a woman this time. The counting of votes will be held on December 4.

PV Sindhu agrees to play in Thomas and Uber Cup |...

Protests over agri laws: Next round of talks between Centre and...