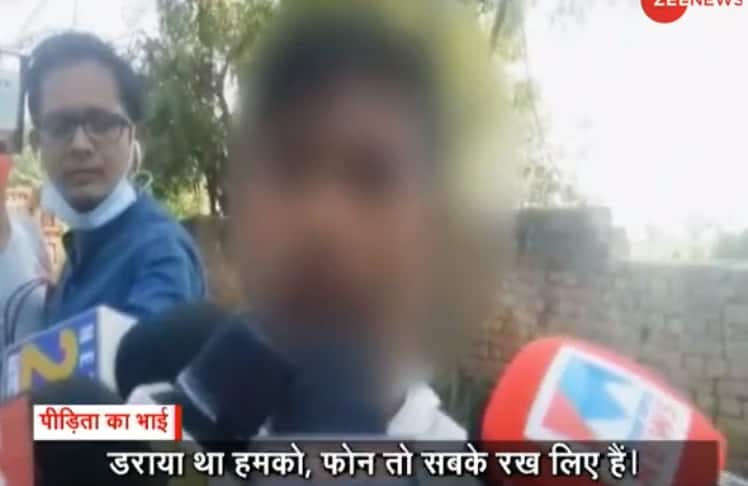 New Delhi: The family member of Hathras incident victim on Friday (October 2) complained that they are being stopped from speaking to media. Notably, the administration has imposed section 144 of CrPC in this village of Hathras.

On Friday morning, a minor from the victim`s family was sent by the family members to reach out to the media anyhow and ask to connect with them. The minor revealed that they were asked to switch-off their mobiles have and some mobiles are being taken from them.

“They have taken the phone. My family have sent me here to call the media for speaking. I ducked down and came via the field. They are not letting us come out neither are they allowing the media to come in. They are threatening us as well,” said the minor family member.

As he was speaking to the media, soon a police officer came and he fled from the spot. When the media asked the police officer why they are being stopped from interacting with the family, they remained silent. After which a verbal spat broke out between security and the media.

The victim’s family member crossed farmland to reach media waiting outside the entrance of the village following Section 144.

Condemning the rape cases that have come to light in the past week in Hathras, Balrampur, Bulandshahr and Azamgarh, CM Yogi took to Twitter and said the culprits will face consequences that will set an example for others and will be remembered by people.

He tweeted in Hindi, “The ones who even think of harming the respect and dignity of the mothers and sisters of UP will be destroyed. They will face consequences of the kind that will set an example to others. The government is committed to the safety and progress of your sisters and mothers. This is our commitment, this is our promise.”

Meanwhile, Congress leader Priyanka Gandhi Vadra today said that gross injustice was done to the alleged Hathras gangrape victim and is being done to her family.

She said, “I want to say that every woman and man in this country needs to raise their voice against the injustice done to the girl (Hathras victim) and whatever has been happening to her family in the last three-four days,” while addressing a prayer meet for the victim of Hathras incident at Maharishi Valmiki Temple in the national capital.

Priyanka Gandhi further said, “The government did not help. Her family is feeling alienated. I came here when I heard the Valmiki community had organised a prayer meeting for her. I came here to show solidarity with her family. I want to urge all to please raise their voice and put pressure on the government. Justice should be done to our sister.”

She alleged that the victim`s brother and her father could not light the pyre, adding “It is not our tradition. It is big injustice. Justice should be done to them. No funeral is performed after sunset. We cannot remain silent. We came here to show solidarity.”

On Thursday, Hathras District Magistrate PK Laxkar denied “negative rumours” about the rift between him and the family of the gangrape victim. Laxkar told ANI, “I met with six family members of the victim yesterday and we spoke for about an hour and a half. I met with them again today to see their point of discontent.”

“I deny the negative rumours which are rife about my interactions with them,” the district magistrate said.

Hathras victim died in Delhi`s Safdarjung hospital. The post-mortem report reads that the victim suffered a fracture of “C6 cervical vertebra” and there was “extravasations of blood along the fracture line” and the underlying spinal cord was “contused with ascending oedema”. The postmortem report, however, denies rape charges.