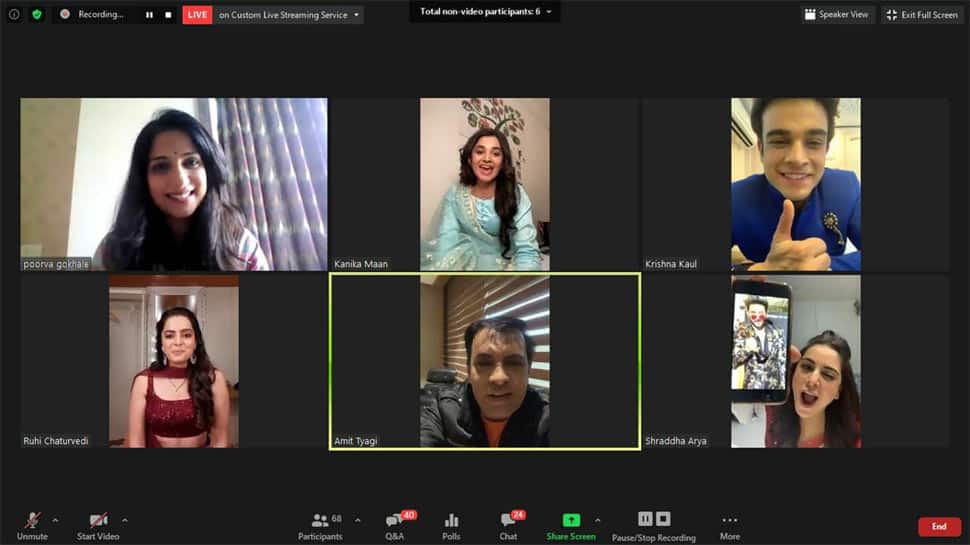 Mumbai: The virtual press conference had a special guest appearance by one of TV’s most beloved couples from Kumkum Bhagya – Shabir Ahluwalia and Sriti Jha. Recently, ZEE5 launched the ZEE5 Super Family League which is a gaming league where the audience can participate, create their own teams and choose actors from their favourite primetime shows – all for free.

Based on the behaviours of their team members, participants can collect points and the highest scorers stand a chance to win fantastic prizes like smartphones, televisions and the grand prize is a car!

ZSFL has been garnering a lot of attention from the audience and earlier today, ZEE5 held a press conference attended by Ruhi Chaturvedi, Shraddha Arya, Krishna Kaul, Kanika Mann and Poorva Gokhale where they spoke about the game and had a very fun and interactive session.

Shraddha shares, “All I would like to say to everyone is to just go ahead and play the game, the fun that you have witnessed at the press conference will continue on ZEE5 Super Family League and you can also win tons of prizes.”

Kanika shares, “I see how all fans are so connected to the characters here and ZSFL is a good platform for everyone to have fun with their favourite characters.”

Krishna shares, “I don’t think that I need to say anything because people are already hooked on to the game, the main thing is to have fun creating your own virtual team and competing against others to score and win some great prizes.”

Poorva adds, “A lot of times we like one character from a show and wished that they would have been paired with someone from another show. Now, the audience has a chance to combine their favourite characters and play the ZEE5 Super Family League, have fun and win prizes.”

Ruhi shares, “The best part of the ZEE5 Super Family League is that fans can connect with their beloved characters on a personal level and play a fun game with great prizes for the winners.”

Manish Kalra, Senior Vice President & Head – AVOD, ZEE5 India shares, “We are very proud of launching India’s first family gaming league. Fantasy leagues have been popular in India, but so far it was only restricted to sports formats. With ZSFL, we have brought this concept to TV shows, making it a unique proposition for the viewers. With gaming on the rise this year, this was the best time to launch ZSFL. In less than 10 days, we have seen more than 1.5 lakh unique users play the game and we expect the scale to be significantly higher over the next 3 weeks. With ZSFL, people will now not just watch their favourite TV shows but play and engage with it as well, all for free and in turn will win exciting prizes.”

The virtual press conference took place on the 25th of November 2020.

Tropical Storm Sally in US to strengthen to hurricane, says forecaster...

Good news for Google Pay users in India, now you can...

Koena Mitra alleges Twitter is shadow banning her for her opinions...