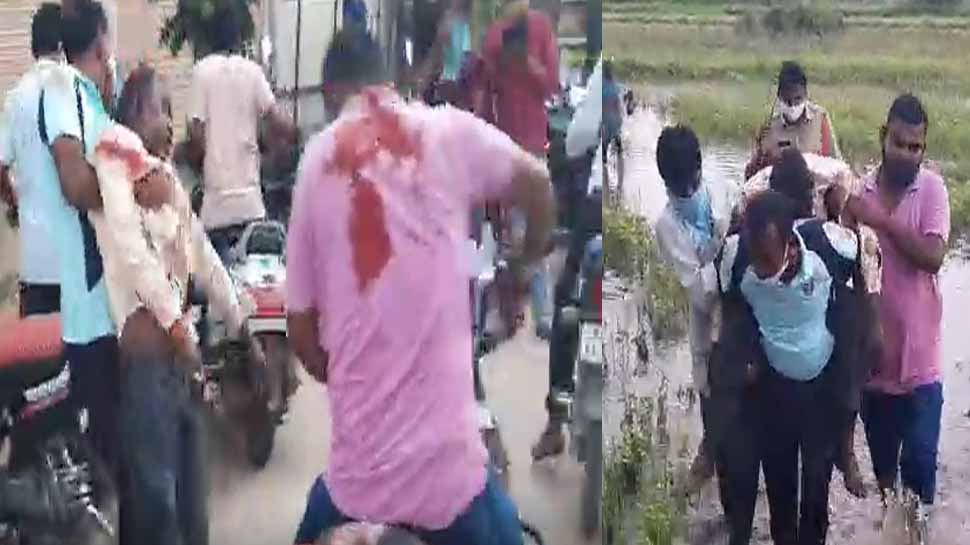 Mustabad/Telangana: Two policemen in Telangana are being hailed for their quick action and dedication to save an assault victim.

Near Mustabad village in Rajanna Siricilla district of Telangana, a man was brutally attacked by his own nephew with axe over family agriculture land dispute issue. The incident occurred on Tuesday evening on a field.

As the word reached the police, local inspector Lakshma Reddy and constable Ravi rushed to the spot and found the victim lying in a pool of blood.

Instead of waiting for the ambulance, the policemen carried the victim on their shoulders and ran through the field to the main road. .

Rajanna Siricilla District Superintendent of Police, Rahul Hegde told Zee News, “Instead of waiting for an ambulance, which anyways could not have come to the fields about half a kilometre from road, and to save the victim as fast as possible, Inspector Lakshma Reddy and police constable Ravi literally carried the victim, Panduga Rajaiah, on thier shoulders and ran thrugh the slushy fields.”

Once they came onto the road, one of policemen started the bike and another held Rajaiah in the middle and they rushed towards a nearby clinic.

However, the victim could not saved despite the herculean effort by the two policemen.

“It’s unfortunate that the victim passed away despite the efforts put in by men. However, I’m going to reward them suitably,” Rahul Hegde, SP, added.

Meanwhile, the accused Mallesh (victim’s nephew) was caught by police. Other family members who are involved in this dispute have also been taken into police custody.

India should join hands with Taiwan and Japan to fight against...

Drug eases recovery for those with severe alcohol withdrawal