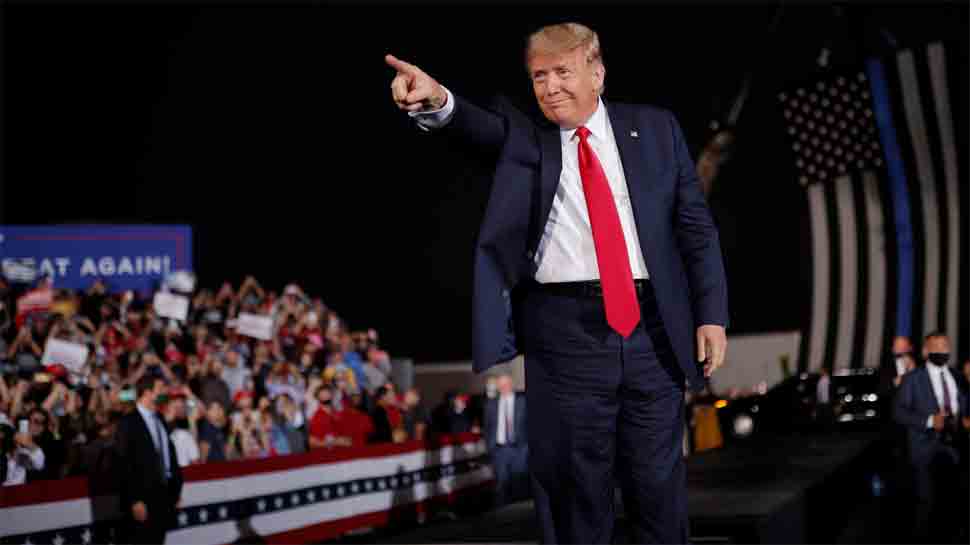 MACON: US President Donald Trump attacked his Democratic challenger Joe Biden saying he is a disaster and a corrupt politician, and urged his supporters in Florida and Georgia to give him a thumping victory in the November 3 presidential elections.

“Joe Biden is disaster. Let’s face it,” Trump told thousands of his supporters in similar speeches in Ocala in Florida and Macon in Georgia, two battleground states.

The president also said that he cannot think about losing to such an incompetent person.

Recently released documents and e-mails published by The New York Post has proved that Biden is a “corrupt” politician, Trump said.

“The Biden family is a criminal enterprise, and you know it, and so do I. In fact, they sort of make Crooked Hilary Clinton look like amateur, if you think about it. Yet all of this is being covered up by the media and big tech (companies). You saw that you see that,” he alleged.

Referring to the Twitter account of White House Press Secretary Kayleigh McEnany being shutdown for some time by the micro-blogging site, the president said that here’s no freedom of press.

“But I won. I said, “How could they be powerful? I won, I never did this before and I won. How the hell are they powerful? But now they’ve gone totally crazy. They’ve done things now that they wouldn’t even do. And they got caught,? Trump said.

Trump threatened to take away the protection given to big tech companies under Section320.

“You know, we gave them Section 230, it’s protection. It protects them from everything, it shields them. So once you do that, the government is giving them something that no other industry has. So they no longer can say freedom of speech,” he said.

Section 230 is a federal law that shields social media companies from liabilities that would otherwise reshape or crush their businesses.
“It’s not freedom of speech, they’ve been given protection, and they’ve abused that protection. And a lot of people are looking now at big, bad tech,” the president said.

“We’re going to show them the American people are in charge by delivering Joe Biden, sleepy Joe, a thundering defeat like they haven’t seen before,” Trump said amidst cheers from thousands of his supporters.

Trump said that Biden with a draconian unscientific lockdown would terminate the US’ recovery, delay the vaccine, prolong the COVID-19 pandemic and annihilate an incredible economy that is starting to boom.

Biden, he said, will deliver poverty, and decline. ?That’s what he’s good at. Look, you know what drives me, when he’s always criticizing saying, oh, I didn’t act fast enough with China. But for two months after I did he said, I was what, xenophobic. I said, what does that mean? I was xenophobic. What does it mean, Joe? Tell me, exactly, please. Give me a definition.” And he said, “I don’t know. That’s what they told me to say,” Trump said.

I am deeply touched by your warm words: Shinzo Abe responds...