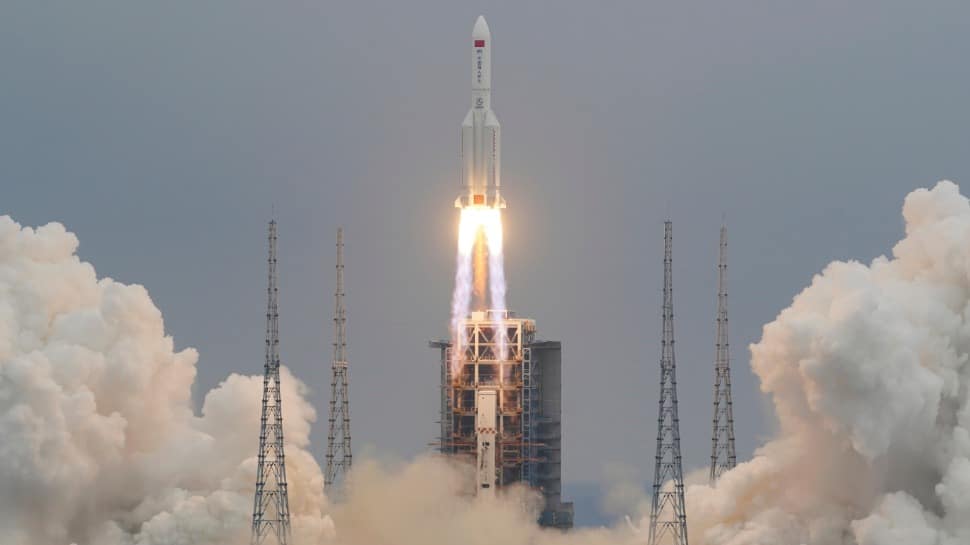 New Delhi: China on Monday (May 10, 2021) slammed the United States over the landing of the Chinese rocket debris and said that the US clearly holds double standard on this issue.

The remnants of China’s biggest rocket, Long March 5B, landed into the Indian Ocean near the Maldives on Sunday with no reports of damage. However, China was slammed by US space agency NASA for ‘failing to meet responsible standards’ regarding their space debris.

During a press conference, Chinese Foreign Ministry Spokesperson Hua Chunying’s said that the US and a few other countries have been hyping up the landing of the Chinese rocket debris.

“As we’ve seen from reports, the upper stage of the rocket has reentered the atmosphere and there’s no surface damage reported,” she stated.

Chunying said that it is currently common practice across the world for launch vehicles of spacecraft to undergo natural orbital decay after passing orbital altitude and then eventually be ablated upon reentry into the atmosphere.

She added that China monitored closely the reentry trajectory throughout the process and released a notice on the reentry in advance.

Chunying said that the Chinese side had shared its reentry forecast through international cooperation mechanisms and that China always conducts activities for peaceful uses of outer space in accordance with international law and customary practice.

“However, I would like to point out that some media and individuals in the US clearly hold double standard on this issue. You may recall that in March this year, when a piece of a SpaceX rocket crashed on a farm in the country, American media used such romantic descriptions as “lighting up the night sky like a meteor, producing a spectacular light show”.

“But when it comes to China, the tune is completely different. I noticed some jesting online in China, saying that US politicians may be forgetful, but the Internet has a long memory. We stand ready to strengthen cooperation with other countries including the US, but we reject double standard on this issue,” Chunying said.

Earlier, NASA Administrator Bill Nelson had said that China is failing to meet responsible standards regarding their space debris and stated that the spacefaring nations should maximize transparency regarding those operations.

“It is critical that China and all spacefaring nations and commercial entities act responsibly and transparently in space to ensure the safety, stability, security, and long-term sustainability of outer space activities,” the NASA Administrator added.

Men and women experience similar rates of anxiety due to job...

Marine pollution: How do plastic additives dilute in water and how...