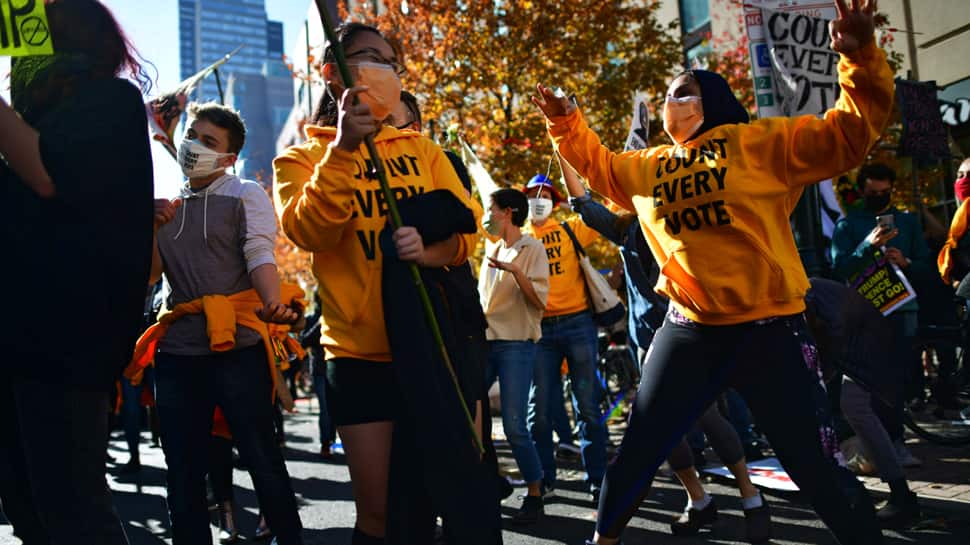 PHILADELPHIA: Supporters of Joe Biden danced in the streets outside a ballot-counting centre in Philadelphia on Friday as the steadily growing vote tallies showed the Democratic former vice president could soon be declared the winner of the U.S. presidential election. In Detroit, several hundred supporters of President Donald Trump, some visibly armed with guns, raised premature chants of “We won!” outside a counting centre, despite it looking increasingly unlikely that this would prove true.

Philadelphia appeared to relish its turn as the centre of the nation`s attention, even if it was earned only by the relative slowness of its vote counting as the biggest city in the closely fought state of Pennsylvania. It is one of a handful of pivotal states where the outcome of Tuesday`s presidential election was still too close to call.

Sean Truppo, a 37-year-old social studies teacher, said he lit fireworks upon awaking to the news that Biden had overtaken Trump in the state`s count before putting his 4-year-old daughter in a stroller to join the growing crowds outside the Philadelphia Convention Center. “My daughter was born under Trump and I wanted her to witness the end of Trump,” he said.

Biden has a 253 to 214 lead in the state-by-state Electoral College vote that determines the winner, according to Edison Research. Winning Pennsylvania`s 20 electoral votes would put the former vice president over the 270 he needs to secure the presidency. The nation has spent more than two days waiting for poll workers, many of them civic-minded volunteers, to canvas millions of votes in just a handful of closely fought states.

Many Americans have passed that time staring at the slow crawl of developments on the news, or finding chores to distract themselves from the prolonged uncertainty. A few, however, have taken to the streets, with Biden supporters cheering for poll workers to “count every vote,” at times breaking into dance whenever someone turned up a Beyoncé or Missy Elliott song on loudspeakers.

Some Trump supporters, taking a cue from the president himself, insisted there must be something wrong with any count that showed Biden winning, and brought their rifles and handguns with them to rallies outside counting centers in Detroit and Phoenix, Arizona. Dressed in the Trump-supporter uniform of “Make America Great Again” red baseball hats, some fell to their knees in public prayer.

Gary Smith, 69, a registered nurse, drove in from Casco, Michigan, to attend the rally outside Detroit`s counting center, dressed in a shirt that said: “Mess with us and you mess with the whole trailer park.” “There have been a lot of phony votes that have been counted,” Smith said, echoing the baseless claims made by Trump during extraordinary remarks made at the White House on Thursday evening. Smith said he wished that most legal mail-in ballots would be deemed illegal.

“We will continue with lawsuits, protests, who knows, maybe civil disobedience,” he said. Studies have found illegitimate ballots to be vanishingly rare in the highly decentralized state-controlled systems used in U.S. elections, which involve both Democratic and Republican election officials and vote-counting observers from both parties.

In Arizona, another closely contested state, Trump and Biden supporters briefly scuffled outside the Maricopa County Elections Department in Phoenix overnight. A growing crowd of several hundred Trump supporters returned to the counting center in Phoenix from surrounding Maricopa County on Friday morning, with some 142,000 ballots still to be counted after a record-breaking wave of early voting resulting from precautions taken during the coronavirus pandemic.

“This race is still very much in play in the state of Arizona,” Charlie Kirk, a conservative activist and founder of Turning Point USA, a conservative organization for college youth, told the crowd. Overnight in New York City, police pushed and shoved protesters, reporters and at least one elected official as they made arrests and tried to move demonstrations out of roadways.

The heavier, the better — superior stability in isotope functionalized perovskites

Why people with dementia go missing

One in 3 women subjected to physical or sexual violence in...