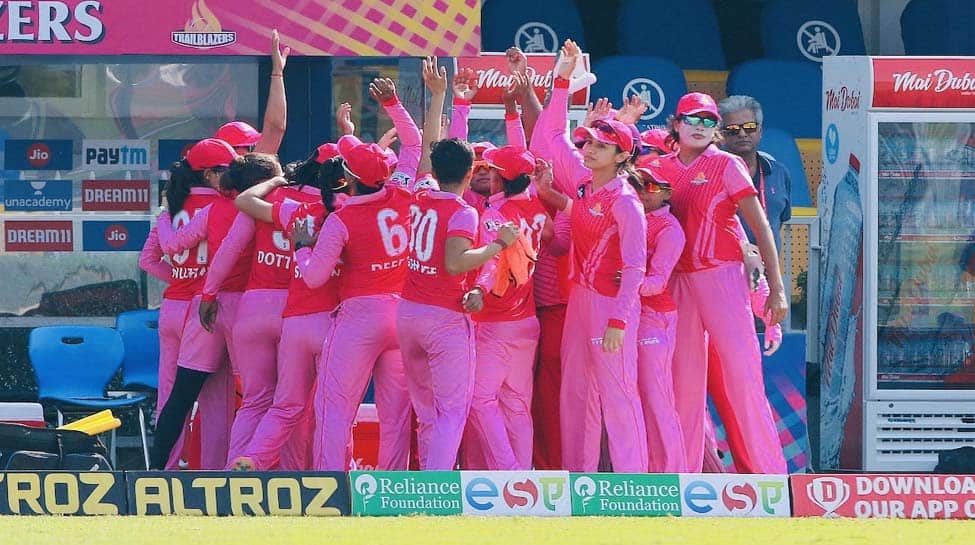 Harmanpreet Kaur-led Supernovas held their nerves to clinch a narrow two-run victory over Smriti Mandhana’s Trailblazers in the third and final round-robin game of the ongoing 2020 edition of the Women’s T20 Challenge at the Sharjah Cricket Stadium on Saturday.

It was Supernovas who won the toss and elected to bat first in the third match of the competition.

Openers Priya Punia and Chamari Atapattu provided a perfect start to their side by sharing a good 89-run partnership for the opening wicket.

While Punia was dimissed for 37-ball 30 on a Salma Khatun delivery, Atapattu notched up a crucial half-century before eventually departing for 48-ball 67 runs on a Harleen Deol delivery.

Subsequently, skipper Harmanpreet contributed with 31 runs off 29 deliveries, while Jemimah Rodrigues (1), Shashikala Siriwardene (2) and Anuja Patil (1) all fell cheaply as Supernovas posted a score of 146 for six in their stipulated 20 overs.

In reply, Trailblazers openers Deandra Dottin (27) and skipper-cum opener Mandhana (33) shared a 44-run stand for the first wicket before Deepti Sharma (43) and Harleen Deol (27) added 52 runs for the fifth wicket to take their side close to the victory.

However, Supernovas’ Radha Yadav removed all-rounder Harleen Deol off the second last ball when the Trailblazers needed four runs to win off two balls to help her side seal the victory.

Radha and Shakera Selman bagged two wickets each for Supernovas, while Anuja Patil also chipped in with a wicket.

Chamari Atapattu was declared ‘Player of the Match’ for her impressive performance with the bat.

The two sides will now lock horns in the summit showdown of the tournament on November 9.

Diwali Gift: Banks to issue cashback by 5 November for ‘loyal’...

Love bursting firecrackers? These states have banned their use this Diwali...